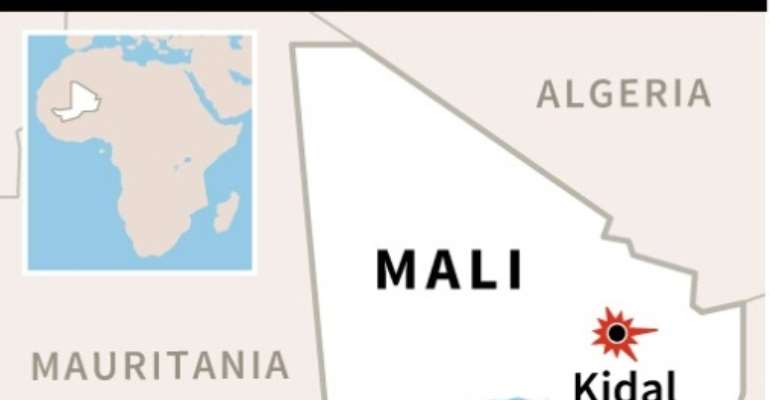 Map of Mali locating Kidal, where one UN peacekeeper was killed and another wounded after a bomb hit their vehicle. By AFP (AFP/File)

A UN peacekeeper was killed in northern Mali and another seriously wounded after their vehicle hit a roadside bomb on Thursday, the UN mission said.

The blast occurred some 50 kilometres (30 miles) south of the northern city of Kidal, in the latest violence to hit the conflict-ridden Sahel state.

A teacher in the nearby town of Anefis told AFP that an Egyptian contingent of the UN peacekeeping mission in Mali had been protecting a supply convoy when it hit the landmine.

Mali has been struggling to contain a jihadist insurgency that first emerged in the north in 2012, and has since spread to the centre of the country and neighbouring Burkina Faso and Niger.

Thousands of soldiers and civilians have been killed in the conflict to date, and hundreds of thousands have had to flee their homes.

The United Nations has some 13,000 troops deployed in Mali as part of its peacekeeping mission -- known as Minusma.

Over 220 UN peacekeepers have lost their lives in Mali since first deploying in 2013.

Minusma head Mahamat Saleh Annadif condemned Thursday's attack, saying in a statement that the peacekeepers "will not be intimidated".

"I recall that attacks against UN peacekeepers can constitute war crimes under international law," he said.