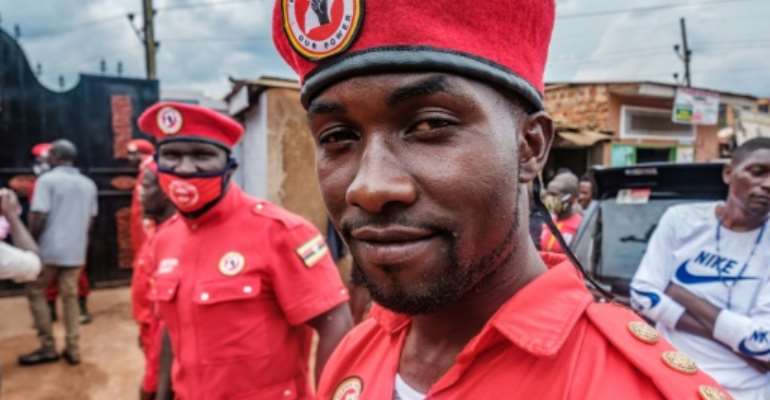 The 38-year-old was detained for several hours. By SUMY SADURNI (AFP/File)

Uganda's pop star-turned-politician Bobi Wine said Thursday that a raid on his offices was an attempt to block his bid to run in a presidential election due early next year.

Wine, an opposition MP whose real name is Robert Kyagulanyi, told AFP that security forces had taken documents containing millions of signatures a candidate is required to collect to enter the presidential race.

The 38-year-old was detained for several hours during the raid on Wednesday.

"The raid on Wednesday was surgical. It targeted the seven million signatures supporting my candidature, our campaign materials and to instil fear on a determined nation clamouring for change," Wine said.

"The raid has taken us a step backwards because we are running out of time for my nomination in about two weeks time since most signatures were taken by security during the raid."

He accused the government of veteran President Yoweri Museveni of employing "desperate strategies to stay in power but our supporters are determined to fight back and appendix their signatures on my nomination papers."

The electoral commission will begin its nomination of presidential candidates on November 2.

He also accused the police and army of stealing some 23 million Ugandan shillings ($6,200, 5,300 euros) donated by citizens for the nomination of his National Unity Platform (NUP) parliamentary candidates.

However, police spokesman Fred Enanga denied this, saying "no money was taken from the offices."

Army spokeswoman Flavia Byekwaso said Wednesday that the purpose of the raid was to seize outfits and berets worn by Wine's supporters, that they argue are military wear.

Uganda on September last year designated the red beret and tunic which have become Wine's signature as official military clothing, imposing a punishment of up to five years in prison for any civilian found wearing it.

Wine has defied the directive and urged his supporters to keep wearing the party colours.

Wine has become a popular figure among the youth in a country where the median age is less than 16.

Since becoming an MP in 2017, he has been routinely arrested and put under house arrest, his concerts banned and public rallies dispersed with teargas.

After nearly a quarter century in power, the 76-year-old Museveni is the only president most have known.

Museveni, one of Africa's longest-serving rulers, had the constitution amended for a second time to allow him to run a sixth time in 2021.