Fears of internet blocks ahead of tense Guinea poll 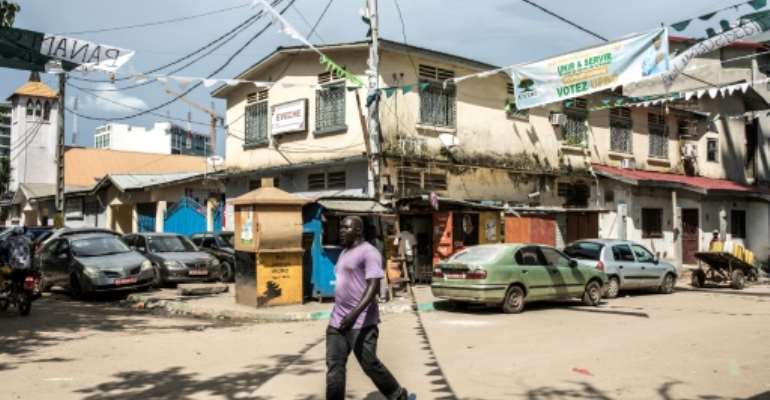 Guinea is preparing for a tense election on Sunday as President Alpha Conde stands for a disputed third term. By JOHN WESSELS (AFP)

Internet freedom monitors have their eyes trained on Guinea ahead of its tension-filled election on Sunday, fearing that the government will restrict access to social media to weaken the opposition.

The concerns come after months of political unrest in the West African state, where President Alpha Conde, 82, is bidding for a controversial third term.

Defying critics, he pushed through a revamped constitution in a referendum on March 22, which he argued would modernise the country, but which also allowed him to sidestep a two-term limit for presidents.

Worryingly for rights activists, internet disruptions accompanied the referendum -- a speech-crimping scenario they say will likely play out again.

"It's very rapidly become an element in how elections are decided in Guinea," said Alp Toker, the founder of internet-monitoring group NetBlocks.

"March was an inflection point," he added, noting that he thought fresh election-related restrictions were likely.

Alpha Diallo, president of the association of Guinean bloggers, also told AFP that there are "certainly going to be social-media cuts" this week.

Warnings of disruptions have already appeared ahead of Sunday's poll.

Diallo's group is deploying electoral observers on Sunday, he said, who are trained to use virtual private networks (VPNs) to bypass possible restrictions.

But at a press conference in Conakry this week, he warned that internet restrictions would nonetheless hinder the work of observers.

"We are not going to allow what happened last time," he said, explaining that his group would document all blocks.

Guinea is a poor but resource-rich nation of 13 million people, which has enjoyed little stability between coups since its independence from France in 1958.

Conde became the country's first democratically-elected leader in 2010, but critics increasingly accuse him of veering towards authoritarianism.

Mass protests against a Conde third term from October last year were met with a ruthless crackdown, in which dozens of people were killed.

Neither Conde's office, nor Guinea's telecommunications ministry responded to several requests for comment about internet restrictions.

Internet blackouts and social-media shutdowns are commonplace across the African continent, and further afield, during times of heightened political tension.

But Guinea is a relative latecomer to the tactic, experts say.

Before the March referendum, the country's telecoms infrastructure firm Guilab announced repairs to its submarine internet cable, but it postponed the work after an outcry.

"The social (media) cuts are 100-percent manufactured because you see that the connection itself is working perfectly," Toker said.

MTN did not respond to requests for comment; Orange said it only interrupts access under "express official written order from a competent authority authorised by law".

"We cannot comment on any specific situation in Guinea or elsewhere," the firm added.

"What they are aiming at with this is people's expression," said Diallo, from the Guinean bloggers' association.

The African Union's special rapporteur on freedom of expression, Lawrence Mute, admonished Guinea for internet disruptions in an April statement.

"Internet and social media shutdowns violate the right to freedom of expression and access to information," he said.

Francois Patuel, a researcher on policing and surveillance in West Africa, said earlier disruptions were a "gross violation of freedom of expression".

"The authorities must refrain from ordering further shutdowns," he said.