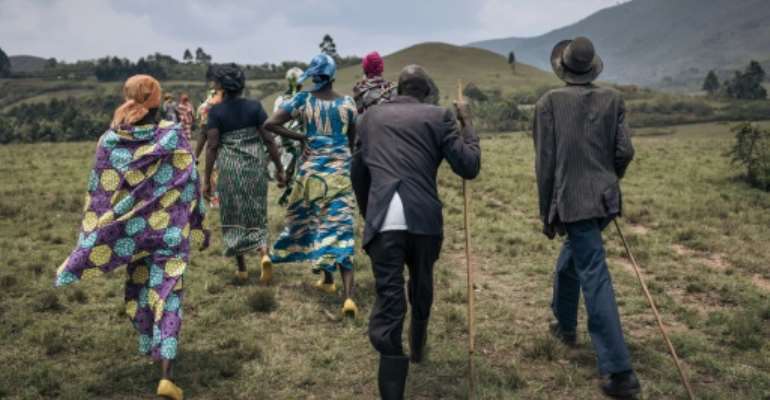 Members of the Banyamulenge community attend the funeral of a local cattle herder in eastern DR Congo. By ALEXIS HUGUET (AFP)

Gathered in the hollow of a remote valley in eastern DR Congo, women on one side and men on the other, around 500 people attended the funeral of Bonaventure Kinyegeria, a Congolese cattle raiser murdered by militiamen.

The armed attackers killed Kinyegeria near the small territory of Minembwe in the highlands of South Kivu province on October 6, making off with his cows.

The daylight raid may have been over cattle, but it was also tied in with a local conflict spurred by a reawakening of deep-seated distrust of Rwanda by many in the Democratic Republic of Congo.

Kinyegeria, 56, was one of the DRC's Banyamulenge community, which has distant origins among Rwanda's minority Tutsi people.

But when it comes to their nationality, the Banyamulenge are categorical: "Congolese, and how!" mourners uniformly told AFP at the funeral.

One of them, a doctor who gave his name only as Sebastian, said that "we were already in the region" before the Berlin Conference of 1884-85 -- when European colonial powers divided up Africa.

But the issue is less clear for many other Congolese, who see these ethnic Tutsis as Rwandan -- or as agents of Rwanda. Disputes over land rights also arise, particularly during the seasonal migration of livestock.

Minembwe's mayor Gadi Muzika, left, rides back to town after the funeral. By ALEXIS HUGUET (AFP)

The murder of the Tutsi cattleman was no isolated incident. Banyamulenge people say that last year they became the targets of militias from other Hauts Plateaux (highlands) communities -- Babembe, Bafuliru and Banyindu -- who joined forces with rebel movements from neighbouring Burundi.

"We have lost more than 300 people and 240,000 head of cattle," said pastor Joseph Harera, whose figures could not be verified by an independent source.

To counter these attacks, two militias claim to defend the Banyamulenge, with the help of a colonel who deserted from the Congolese army.

After the funeral, the community leader and local notables rode home on motorbikes to their stronghold at Minembwe, where the Banyamulenge say they live in harmony with the Babembe and traders from provincial capital Bukavu.

Minembwe is largely inaccessible by land. The road coming up from the cities of Uvira and Fizi on the shore of Lake Tanganyika is impassable because of insecurity, bad weather and its ruinous state.

Apart from helicopters from the UN mission in DR Congo, a small cargo plane from Bukavu flies in two or three times a week with supplies. It lands at an improvised airfield in the middle of rolling pastures at the foot of a mountain.

The fields of Minembwe, which has suddenly become a flashpoint in the DRC for anti-Rwandan hostility. By ALEXIS HUGUET (AFP)

Against this backdrop, with the silhouettes of herdsmen carrying long sticks dotting the fields, and cattle, pretty brick houses and an open market in the shade of a eucalyptus tree, Minembwe seems to all appearances a little paradise lost in the heart of the highlands.

But this peaceful community rouses fiery passions in the media and on social networks across the country.

Decentralisation minister Azarias Ruberwa threw petrol onto the fire during a visit to the village on September 28 after pulling out all the stops to see that it be granted the status -- and powers -- of a full-fledged commune.

Ruberwa, himself a Banyamulenge, has had a house built in the middle of the fields beyond the airstrip, a South Kivu official told AFP.

Some Congolese view Ruberwa's actions as benefitting Rwanda and undermining the "territorial integrity" of DR Congo.

Banyamulenge women gathered for the funeral. By ALEXIS HUGUET (AFP)

Yet Minembwe shares no border with Rwanda. The frontier lies dozens of kilometres (miles) away, in the northeast of the Hauts Plateaux between Bukavu and the Ruzizi plain.

The distance does not satisfy the community's detractors.

"If we leave Minembwe in the hands of these occupiers, tomorrow we'll have no country left," prominent opposition figure Martin Fayulu said last week.

"We will be the first people in Africa to be colonised by another African people," the former presidential candidate added.

On Wednesday in the capital Kinshasa, police dispersed a protest called by Fayulu to "say NO to those who covet the lands and riches of DRC", party activists said.

The youth leader of Fayulu's Ecide party, Serge Welo, told AFP that the tyres of Fayulu's car were punctured.

Police twice dispersed a few dozen of his supporters, who were shouting "no to the Balkanisation of the Congo", outside the police station, according to an AFP journalist.

'The problem of nationality'

On his return from Kinyegeria's funeral to his modest office, Minembwe mayor Gadi Mukiza sought to explain why his small community -- which he estimates at 10 square kilometres (less than four square miles) -- inflames passions across the biggest country in sub-Saharan Africa.

"We are invaded by extremists," Mukiza said.

Minembwe's mayor speaks at the funeral. By ALEXIS HUGUET (AFP)

"The background to all this is the problem of nationality. People say that the Banyamulenge are not full-fledged Congolese."

To try to defuse the explosive issue, President Felix Tshisekedi cancelled the plan to grant Minembwe the status of a commune.

Instead, he promised to set up an expert commission to redefine its territorial limits.

But in Minembwe, as the sun sets into plumes of white mist rising over the fields, the dispute seems far away.

"People from outside are imposing tribalism," sighs one local after the funeral.

"The conflict is about our cows," responds another.

Since Kinyegeria's death, cattle rustlers have struck again around Minembwe.

Your independence will be respected – Akufo-Addo assures new...
16 minutes ago

He has the capacity, intellectual strength to succeed – Akuf...
21 minutes ago