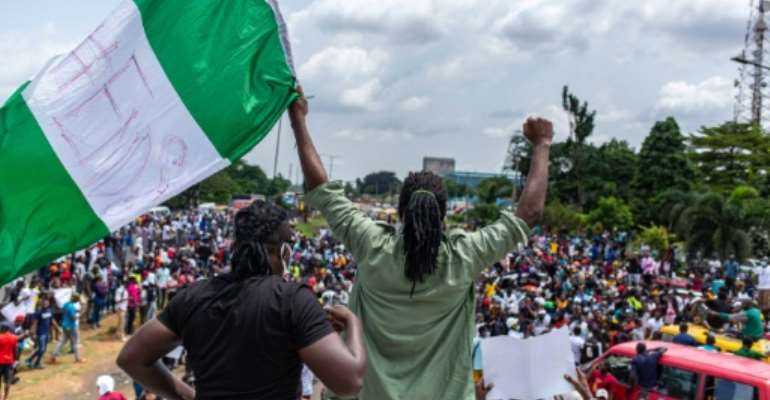 Across Nigeria, young protesters have sang and danced, calling for the political change and the end to police brutality. By Benson Ibeabuchi (AFP/File)

Protests against police brutality in Nigeria have brought Africa's largest city to a standstill and dominated social media, channelling anger among the frustrated youth that has forced the government to listen.

From raising funds online to influencers drawing big crowds, the campaign has topped Twitter worldwide and received support from some of Africa's biggest celebrities.

In Lagos, Abuja, Port Harcourt and other cities, young protesters have sang and danced, sprayed graffiti and snapped themselves for Instagram as they brandish placards reading "stop police violence", "no justice, no peace".

"This is unprecedented," Udo Jude Ilo from the Open Society Initiative in West Africa told AFP, pointing out that protests in Nigeria are normally organised by political parties or unions.

"Young people who are usually seen as removed from governance were now asking the hard questions.".

The hashtag "EndSARS" was trending worldwide on Twitter late last week, part of the campaign led by young people in Africa's most populous country, where the median age is 18.

Nigeria's police have been the main target of the protests. By PIUS UTOMI EKPEI (AFP/File)

The government announced on Sunday that it was disbanding the unit -- which has long been accused of unlawful arrests, torture and extrajudicial killings -- and that an independent body would investigate abuse.

But the government has previously promised to end the unit and not followed through, so the protests have continued and even spread, the country's youth vowing to hold the authorities accountable.

'Learnt not to trust'

"It's no news to us that things are said but not actually done," said Anita Izato, a young lawyer based in the capital Abuja.

"We've learnt not to trust until we see actions."

"For me it's personal because I have five brothers, and police usually target young men," said the 24-year-old, who helped spearhead demonstrations.

In a country ruled by an entrenched elite dominated by ageing politicians, it is most often the young who suffer from the impact of corruption, violence and a lack of opportunities.

Protests have spread as swathes of the country's youth vow to hold the government accountable. By Benson Ibeabuchi (AFP/File)

Victims of police abuse in Nigeria are often between 16 and 35 years old according to data collected by SBM Intelligence, a research and data consultancy.

"Mobilisation has been huge because the youth actually faces an injustice that they can all relate to, that goes beyond tribes and family backgrounds," Leo Dasilva, a 28-year-old equity investor and real estate developer who has nearly 100,000 followers on Twitter, told AFP.

One of the main differences with previous protests, according to SBM Intelligence analyst Confidence MacHarry, is that internet penetration has grown in recent years and police brutality is now often shown and shared online.

Obong Roviel, who has nearly 300,000 Twitter followers, is one of many who has been galvanising support -- but he rejects the term "leader".

"I'm just a conscientious citizen like others affected by police brutality. I'm not an activist, I don't play any role, I just use my voice," the 23-year-old told AFP.

It is most often the young who suffer from the impact of corruption and violence in Nigeria. By Benson Ibeabuchi (AFP/File)

"There is no leader and that is why the protests have been sustained this long," he said.

"This mobilisation has been all about the connections of the youth, the ones out there on the streets, raising funds, using their influence correctly, the youths who are public figures telling everyone to stand firm and the youths in diaspora that really care."

Fuelling the protests has been the high-profile support from some of Africa's biggest stars who have previously been seen as steering clear of politics.

Musician Davido was at the forefront of protests in Abuja while Afropop star Wizkid made a noticed appearance at a gathering in front of the Nigerian embassy in London.

The hashtag "EndSARS" has been one of several used to galvanise support online. By PIUS UTOMI EKPEI (AFP)

"There is a hunger for pop musicians to assume leadership in the country, especially in the south where Afropop stars are the most popular figures across social classes."

American rapper Kanye West also joined in on Monday, tweeting that he stood with his "Nigerian brothers and sisters to end police brutality."

As a second week of protests began and the government made new announcements, many wondered how long the movement would last.

There is still much uncertainty surrounding the fate of officers suspected or accused of human rights violations as well as the shape and form of the police unit that will replace SARS.

"We will continue to monitor what's going on and report if people are being harassed or any injustice is being carried out," Obong said.

"I think it will be a lifestyle now."