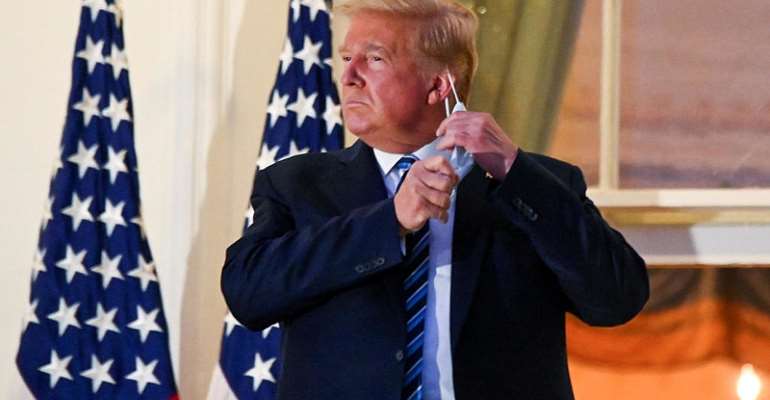 US President Donald Trump staged a dramatic return to the White House Monday night four days after receiving emergency treatment for Covid-19, pulling off his mask and telling Americans not to fear a disease that has killed more than 210,000 people.

Any signs of illness were carefully hidden Monday as Trump sought to display an image of strength.

Hit by Covid-19 just a few days earlier, the US president gingerly climbed the South Portico steps of the White House, ripped off his mask and offered a 23-second salute to the departing Marine One.

Trump, who still has the virus and remains contagious, declared: "I feel good".

Shortly beforehand, he tweeted that Americans, who have lost nearly 210,000 people to the virus, have nothing to fear.

“Don't let it dominate you. Don't be afraid of it,” Trump said, telling Americans “to get out there”.

No wake-up call
The 74-year-old's display of bravado alarmed public health experts and his Democrat rival Joe Biden, who had hoped the president's own illness would have been a wake-up call.

"I would have hoped that the president, having gone through what he went through--and I'm glad he seems to be coming along pretty well--would communicate the right lesson to the American people: masks better," Biden said.

But Trump has continued to downplay the threat of the virus, writing several tweets proving his dominance over, and possible immunity from Covid-19.

"Will be back on the Campaign Trail soon!!!" he said in one tweet.

"Now I'm better, and maybe I'm immune", he claimed in a video posted on Twitter.

Trump's nonchalant message about not fearing the virus comes as cases continue to spike across the country.

Defeating Covid
Despite claiming to be in good health, his own physician has warned that he would not be fully “out of the woods” for another week.

Trump, who was admitted to the Walter Reed Medical Center hospital on Friday, is expected to continue his recovery at the White House, where the outbreak has infected several of his staff and aides in recent days.

Polls now show that Covid-19 has topped voter concerns and is one of the main reasons why Biden 77, has taken a ten-point lead.

Trump's refusal to wear a mask and his propensity to flout physical-distancing guidelines designed to curb the spread of the virus has been met with criticism, and has left him scrambling to catch up with Biden in the polls.

For months, the American leader has given the appearance of trying to wish away the catastrophe and get back to his re-election narrative of a strong economy.

The Republican president, who is seeking re-election on 3 November, now looks poised to try and claim that in getting quickly out of hospital, he has personally vanquished the virus -- and will go on to do the same for the rest of the country.

For all of Trump's determination to reassert himself, he has lost several precious days of a campaign that revolves heavily around his large-scale rallies and image of personal strength.

Biden, meanwhile, has maintained his slow-but-steady campaign that has always emphasised health precautions -- a pared-back style that Trump calls weakness and chided as recently as last week.

Trump's diagnosis has upended the last month of the election campaign and led to unusual interest in this Wednesday's televised debate between the vice presidential candidates -- Republican Mike Pence and Biden's running mate Kamala Harris -- who will be separated by a Plexiglas barrier for the event.