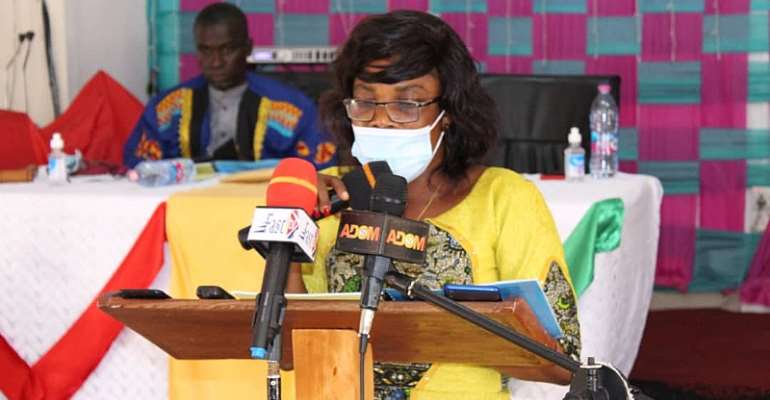 The District Chief Executive for Obuasi East Honorable Faustina Amissah has admonished Assembly members in the District to play a lead role in maintaining the existing peace the District is enjoying; before, during, and after the December 7 General elections. She made this call at a 2 day General Assembly Meeting held in the District.

She said “let us be guided by an approved diction and utterances as much as possible. We must set examples worthy of emulation for others to follow because we have One Obuasi East with one Destiny and One beautiful Ghana".

The DCE in her accounts of what has transpired in the District over the period revealed that in order to prevent the increasing rate of domestic fire outbreak in the District, the Assembly has asked the Information Services Department to launch an aggressive campaign against domestic fire outbreak. She further appealed to the Assembly members to also embark on a rigorous campaign against the menace in their communities.

On health issues and situational reports on the Coronavirus pandemic, Hon. Faustina Amissah disclosed that, with the combined efforts of the Health professionals, the Security agencies, and the Assembly, the infections have drastically reduced. She gave the current statistics of COVID-19 in the District as follows ;

She implored the Members to continue to educate their electorates on the need to observe the safety protocols since they are the only means to avoid the spread of the disease.

Honorable Faustina Amissah also made known to members that the Assembly through the National Board for Small Scale Industries (NBSSI) has given an amount of GH₵ 190,200.00 to fifteen enterprises in the District for the acquisition of machines and equipment for business expansion. In what has been dubbed the Matching grant fund, she said the aim of the grant is to enhance job creation in the Obuasi East District.

Meanwhile, the Assembly is set to benefit from the 88 District Hospitals announced by the President. The project will be sited at Kwabenakwa.

This was among a plethora of projects expected to be implemented in 2021.