No room for abortions: unwanted pregnancies in virus-hit S.Africa 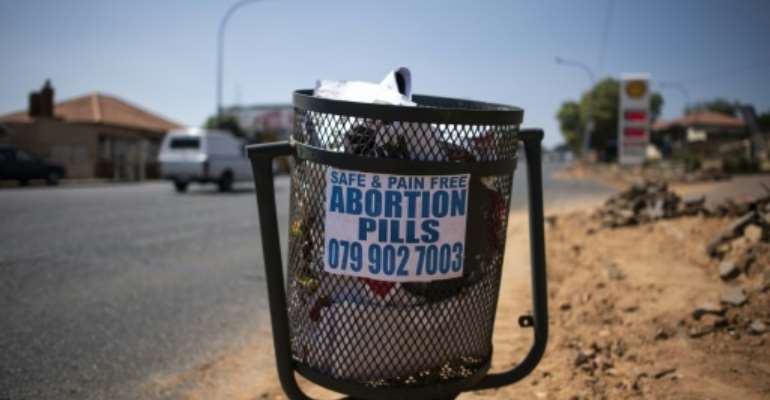 The pandemic has made access to abortion and contraception more difficult in South Africa, charities and health workers say. By LUCA SOLA (AFP)

South African student Jessica* had already missed two periods when she shyly slipped into a clinic to seek an abortion in early July, as the coronavirus outbreak was reaching its peak.

Nurses scurrying to accomodate a long line of patients with varying ailments told the 19-year-old that the clinic was "fully booked" and advised her to try at a hospital.

Two months later, with the help of a local rights group lobbying hospitals to assist, Jessica was finally booked in for a procedure that required surgery -- rather than pills -- due to the delay.

And it was almost too late. Another dozen days would have taken Jessica past 20 weeks, the legal limit to terminate a pregnancy in South Africa.

"It was draining. It was the worst thing I have experienced," she told AFP via telephone two weeks after the operation.

The pandemic has made access to legal abortion services and contraception more difficult in South Africa, according to charities and health workers.

They believe that movement restrictions, overstretched hospitals and disrupted drug supplies led to unwanted pregnancies that many women failed to discontinue.

"So we started seeing more people coming in and saying: I went to such and such hospital and they couldn't assist me."

Hospitals and clinics scaled back all but essential services when a nationwide anti-coronavirus lockdown was imposed in March.

The move freed up hands and space in facilities about to confront Africa's worst coronavirus outbreak.

But access to family planning suffered greatly as a result, particularly in already poorly-serviced rural areas.

"During Covid our whole service just came to a halt," said a hospital doctor in the southeastern small town of Peddie.

Women seeking an abortion in Peddie were referred to far away cities.

The doctor, who did not wish to be named, suspected that most women were unable to travel such distances without raising questions -- particularly during lockdown.

"It takes a lot for them to even come here and ask for an abortion," he said, noting the stigma attached to the procedure.

"So to get here and be told that we are not providing these services must be a final nail in the coffin."

A poster advertising an illegal abortion in Johannesburg, as access to legal abortions have become more difficult. By LUCA SOLA (AFP)

In KwaZulu-Natal province, many women stopped visiting clinics to renew their contraceptive injections -- the most widely-used form of free birth control in South Africa.

A nurse overseeing reproductive health services in the area suspected they held back "from fear of catching coronavirus" and because of limited privacy.

"Women leaving their homes were likely to be questioned," she said, pointing to widespread misconceptions about contraception.

By the end of May, the nurse, also speaking anonymously, noticed a sudden surge in the number of women seeking to end pregnancies.

By then, the few facilities providing abortions were swamped by coronavirus and many were short on drugs.

"When they come to us it is usually the last straw," said Kholofelo Mphahlele, with advocacy group Section27 in Gauteng province.

"Nine out of 10 lockdown calls have been teenagers that want assistance as fast as possible," said Mphahlele. "Before their parents find out."

Abortion information platform safe2choose, meanwhile, noticed that the number of women who had passed the 12-week mark when they eventually reached out, had doubled during the pandemic.

After 12 weeks, abortion pills are no longer an option.

"There are so many more hurdles with the later pregnancies because it has to be in-clinic," said safe2choose consultant Marie-Simone Kadurira.

'I would have done it'

More than four months into her pregnancy, 20-year-old Silindokuhle* had not yet plucked up the courage to break the news to her mother.

The Johannesburg-based student was visiting her extended family in KwaZulu-Natal when she had unprotected sex.

Finding a morning-after pill was tricky in the conservative rural setting.

Silindokuhle returned to Johannesburg in June and stayed with her parents in Soweto township.

By then she knew she was expecting and was determined to discreetly terminate the pregnancy.

But the odds were stacked against her.

"It would have been easier if there wasn't corona," she told AFP via telephone.

When she went to a hospital, overwhelmed doctors referred her to a packed local clinic.

"There was a line of people outside," she recalled. "So I thought I would get back home too late, because I have a curfew."

Constrained by secrecy and uncertain about her options, Silindokuhle grew increasingly confused.

She eventually gave up when she heard the baby's heartbeat during an ultrasound.

"If I had managed earlier, before seeing the scanner, I would have done it," she said, tearing up.

"I am worried... but I just have to hope that everything will work out."

*Names have been changed to protect identities

MPs split heads as anti-LGBTQ+ bill to be laid in Parliament...
4 minutes ago

Angola President in Ghana for 3day visit
9 minutes ago