Shadowy militia sows fear in C. Africa ahead of vote 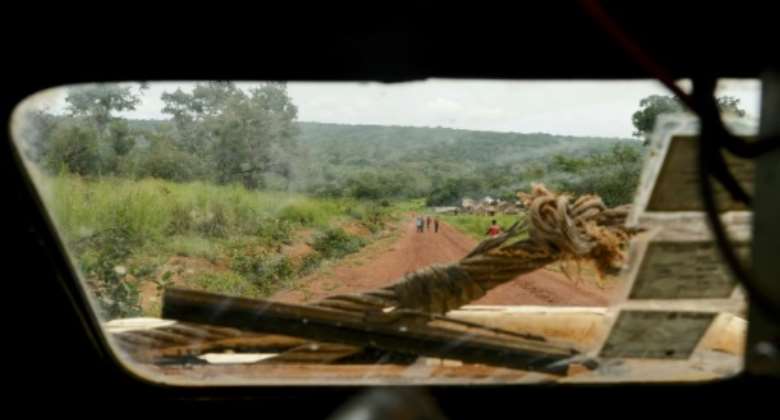 Since the UN force MINUSCA chased the 3R armed group from its bases in June, the militia roam the bush, where they continue to mount attacks. By Camille Laffont (AFP)

Major Ashif is tense as he watches from the turret of his armoured vehicle as the muddy road in front of him slowly unwinds.

His is the lead vehicle in a UN escort shepherding a convoy through northwest Central African Republic (CAR), one of the world's poorest and most violent countries -- and the thick undergrowth on either side of the road is perfect for an ambush.

And, in line with the CAR's tortured history, those likely to carry out any attack are members of an armed group that has signed up to a peace deal.

The militia calls itself the 3R, from the words in French meaning "Return, Reclamation, Rehabilitation".

One of the most powerful rebel groups in the country, the 3R claims to defend the Fulani -- a cattle-herding community also called the Peul.

In February last year, the 3R's chief, Sidiki Abass, joined the heads of 13 other armed groups to sign an accord in Khartoum on ending the country's endemic violence.

But with presidential and legislative elections looming on December 27, the army and the UN force MINUSCA that supports the beleaguered government are bracing for a possible flareup.

In June, MINUSCA carried out a wide-ranging operation to root out 3R rebels from bases in the northwest.

Several hundred militiamen scattered into the bush, where they have continued to mount attacks on the security forces and carry out ransom kidnappings of traders.

A Bangladeshi peacekeeper stands on the road to Koui, 3R's stronghold. By Camille Laffont (AFP)

Ahead of the vote, Abass has raised the stakes, declaring a ban on security forces and electoral teams from entering "his" territory.

"Last year, I could travel by road by myself, but this is impossible now because of the poor security," said a judge who was travelling with the convoy that day.

The CAR has had negligible peace since it gained independence from France in 1960.

It plunged once more into bloodshed in 2013, when the Seleka, a rebel coalition drawn largely from the Muslim minority, toppled then-president Francois Bozize, a Christian.

In 2016, after France intervened militarily to quell sectarian massacres, elections were won overwhelmingly by Faustin-Archange Touadera, who is seeking re-election in December.

But Touadera's reach is small. Militias still control two-thirds of the territory, typically claiming to defend the interests of a given ethnic or religious group.

The 3R was born in 2015 to defend the Fulani, who are Muslim, from a Christian militia called the anti-balaka.

But the convoy's trip through the northwestern landscape provides telling clues of a more ancient conflict.

The road through the bush eventually leads to a rocky, valleyed region.

The RN1 road, linking the capital Bangui with Cameroon, seen from a MINUSCA helicopter. By Camille Laffont (AFP)

Here, the semi-nomadic Fulani and sedentary farmers have squabbled for years over the use of land to graze herds.

All along the roadside lie the empty, ruined homes of farmers, many of them also Muslims, who have fled to neighbouring Cameroon.

The 3R imposes heavy taxes on Fulani herders in exchange for their declared protection.

"We have a mutual arrangement," said a 3R leader who gave his name as General Bobo, at their stronghold in Koui, more than 500 kilometres (300 miles) from the capital Bangui.

"If you are four brothers, two join the movement and two look after the cattle."

The group have used the income to buy grenade- and rocket-launchers, US-made M16 assault rifles, mines and improvised explosive devices.

The 800 Bangladeshi peacekeepers in the region are involved in a high-risk game of cat and mouse with a group that, from generations of herding, knows every nook and cranny.

Their knowledge of the bush "is better than anyone's," said a senior MINUSCA officer. "They move at night and lay low during the day."

The UN troops have to make do with untrustworthy local informants, rifles without telescopic sights and vehicles battered by the CAR's poor roads.

Added to this is a dispiriting sense that the military are powerless to haul the country out of a political and social quagmire.

Despair is also felt within the Fulani community.

Sabi Mandjo, the descendant of a line of Fulani princes who represents the community in distant Bangui, said many recruitments to 3R were "forced."

"The Fulani are fed up but don't know where to go or what to do," he said.

Sedentary farmers in the northwest, for their part, feel they are chaff caught up in the CAR's whirlwind of violence.

Convoys must be escorted by MINUSCA soldiers. By Camille Laffont (AFP)

Asha Salamatou is president of a women's association in Bocaranga, a town just outside Koui.

A Christian married to a Muslim, she has repeatedly tried to mediate to end the violence, sometimes at the risk of her life, but inevitably in vain.