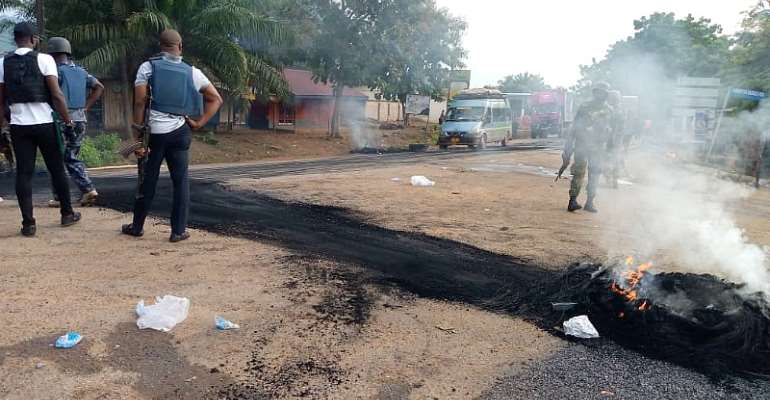 The Ghana Police Service has urged persons travelling from Accra to Ho, Aveyime, Adidome, Mepe, Akuse, Sogakope, and Aflao to be cautious due to heavy vehicular traffic.

According to the police, this is as a result of security operations ongoing within those areas following roadblocks believed to have been perpetrated by secessionist group, Homeland Study Foundation.

“Good morning Ghana, commuters to and from Accra to Ho, Aveyime, Adidome, Mepe, Akuse, Sogakope and Aflao are likely to experience traffic due to security operations within those areas.”

“Anybody travelling on any of those roads should exercise caution,” the Ghana Police Service urged in a post on Facebook.

The Police is conducting a security operation on such roads due to road blockade by members of the secessionist group, Homeland Study Foundation, also known as the Western Togoland group.

The action by the group is believed to have taken place on the dawn of Friday, September 25.

There are also reports of attacks on a number of police posts amidst the burning of tyres.

“The Western Togoland members have blocked all the roads in the Volta region. We don't know what is going on because we are unable to go close to them. There are some navy personnel around. We have left our buses to go to Sogakope. We do not know what will happen amidst the gunshots the people are firing”, one of the stranded travellers told Citi News.