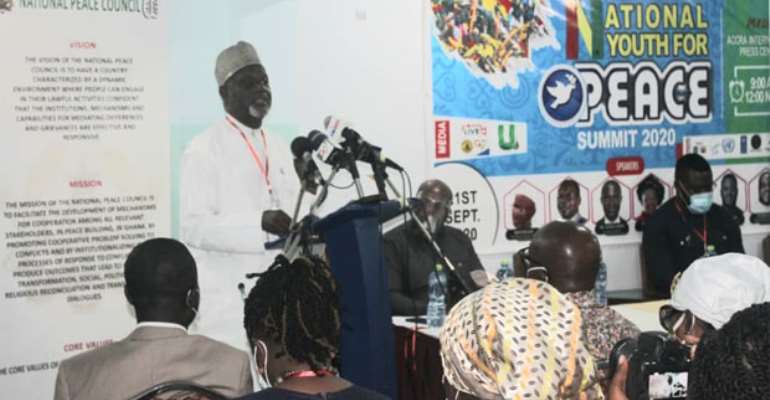 Ghanaians particularly the youth have been urged to disown vigilantism in all its forms if the country is to maintain and improve the peace it is currently experiencing before during and after the upcoming December 7 election.

Board Member of the National Peace Council (NPC), Maulvi Mohammed Bin Salih, said if the youth disown vigilantism and all its manifestation and put their shoulders to the wheel to eliminate political intolerance, then can the nation build stronger institutions that will earn the trust of its citizens.

He said there was the need to recognize the fact that Ghana has come a long way in maintaining its peace and at this stage the emphasis should be on eliminating political intolerance which is inimical to the development of the country.

“What should catch our mind and attention is the implementation of the code of conduct in the recently reported incidents of violence during the just ended voter registration exercise… I also appeal to all citizens to join the movement to sustain the peace in the country,” he said.

He noted that the NPC is fully aware that political parties need the support of all citizens especially institutions that have been assigned that role to totally eradicate vigilantism.

“The Peace Council in 2016 established a monitoring mechanism to mitigate threat associated with the 2016 elections, the Council will make use of the mechanism and make it even stronger for the peaceful conduct of the 2020 elections,” he added.

Maulvi Mohammed Bin Salih was speaking at a commemorative event to celebrate the International Day of Peace organized by the Ghana Journalist Association (GJA) in collaboration with the National Peace Council (NPC) and Women is the Centre, a Non-Governmental Organization on the theme: “Shaping Peace Together-The Role of the Youth in Peace Building” in Accra.

The International Day of Peace was established in 1981 by the United Nations General Assembly and is observed around the world on September 21.

GJA President, Affail Monney appealed to the media not to take Ghana on the trajectory of self-destruction but rather do more to promote the virtue and minimize the threat of violence.

He said the media must sharpen their gate-keeping instincts and deny persons of all-partisan hues, who spew violence or heap insults on their opponents access to airtime or print space.

“The Media must name and shame politicians and their followers, who tend to rock the boat by their ugly words and toxic deeds,” he added.

He commended the NPC and other stakeholders for their collaboration to continue to promote and create awareness on peace.