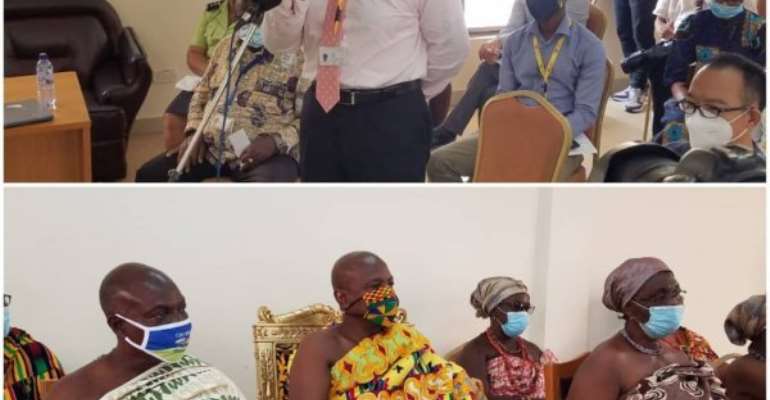 Togbe Afede XIV, the Agbogbomefia of Asogli State, has noted that the use of the Ho airport would present a tremendous opportunity for the local economy to grow and expand.

He called on the people of the region to patronise the facility when operationalised.

Togbe Afede was speaking during a courtesy call on the chiefs of the Asogli state by the Executives of the Africa World Airlines.

He said the absence of a business case for the US$25 million-dollar facility caused its neglect, saying aside from the commercial flights, other services would make the airport essential.

He said the airport is “a very tremendous opportunity for the development of Ho, and that Asogli State attached much importance to the facility, having led efforts to commercialise it.”

The Agbogbomefia was grateful to the management of the airline for the interest.

He said an aircraft maintenance, repair and overhaul (MRO) operations and an aviation training school were among the possibilities being explored to realise the full economic potential of the airport.

“I want to thank you very sincerely for taking the time to come here to explore the possibility of AWA commencing commercial flight services to Ho. It is great news for us in the Region.

“We have planned to open up Ho for a long time now, just that the hold back has been that Government has not taken over the airport.''

“I am happy that the management of AWA is here today and has underscored their preparedness to fly to Ho. But of course, it's all subject to commercial viability. I am happy my people have told me that they are willing to use AWA services,” Togbe Afede said.

He recounted emergencies in the region that was salvaged with the help of the airport and complimented proponents of the facility.

“I will like to pay tribute to those who promoted the idea of an airport in Ho and I will like to urge my people to make use of the airport so that its viability would never be in doubt, and so that it can bring other developments.

“You know the impact aviation can have on any community. It is a very tremendous opportunity for us to put Ho on the international market.

“We will continue to explore other opportunities to make the airport useful, most importantly an aviation training school, and also an aircraft maintenance facility. But these are all subject to us all here making the airport useful,” he said.

The Ho airport was completed more than three years but yet to be put to commercial use.

Captain Kwasi Oteng, Chief Safety Officer of AWA, confirmed the economic viability of the aviation business in the Municipality and said the airline would increase its route to cover the city once plans had been finalised.