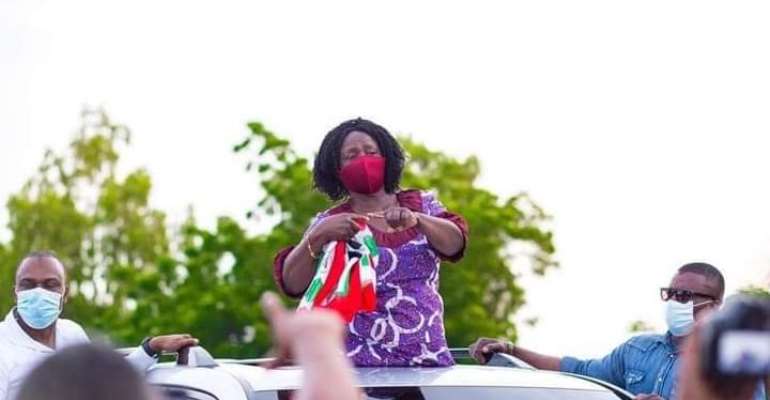 The People's Manifesto of the National Democratic Congress (NDC) adequately caters for the socio-economic needs of the Western Region, Vice Presidential Candidate of the NDC Prof. Jane Naana Opoku Agyemang made said as she ends her Western Region tour.

She gave the assurance that all infrastructure projects which were started by the previous NDC administration, but were abandoned by the present government, would be completed when the NDC is voted into power.

She explained the provisions in the NDC manifesto for national progress and indicated that the socio-economic needs of the region have been adequately catered for in the manifesto.

Touching on education, she pledged that the next NDC government will ensure increased access to quality learning, introduce more incentive packages for teachers, and restore discipline in schools.

The visit, her first to the region since she was outdoored as running mate to President John Dramani Mahama, enabled Prof. Opoku-Agyemang to introduce herself to the chiefs and people, and to solicit their support for the NDC in the upcoming general elections.

During the tour, Prof. Opoku-Agyemang paid courtesy calls on various traditional leaders, interacted with a number of stakeholders including traders, artisans, small scale miners, farmers, students, fishermen and professional groups, among others.

The Running Mate, who arrived in the region on Sunday to a rousing welcome, expressed appreciation to the chiefs and people for their warm reception.

She ended the tour with an assurance to the people of the region that the NDC offers the best choice for quality and trusted governance that will lead to sustainable development for all Ghanaians.