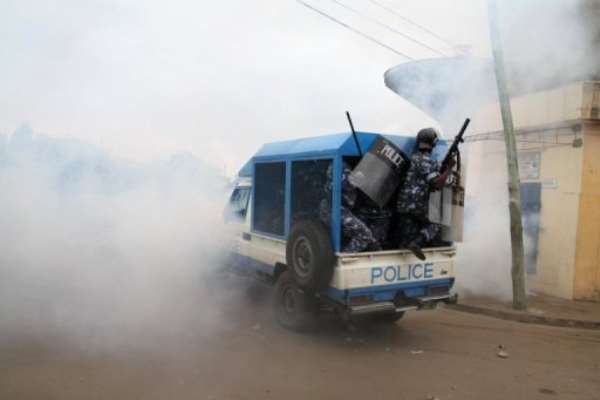 For many decades governments around the world, especially in the USA, have fired tens of thousands of rounds of CS gas at their own people in an attempt to control “civil unrest”.

The media falsely labels CS gas as “tear gas” rather than calling it what it is, poisonous gas.

The original tear gas was relatively benign, irritating the eyes and mucus tissues but was not poisonous. CS gas, on the other hand, will kill you if you are exposed to enough of it.

CS gas is so toxic that it has been banned under international conventions governing the laws of war. In other words, the USA, or any government signatory to these pacts, is not permitted to use CS gas in wartime against soldiers or civilians. To do so would be a War Crime or Crime Against Humanity. Yet these same governments commit Crimes

Against Humanity almost every day, not hesitating to use poisonous CS gas against their own people.

In war or peace CS gas, or any poisonous gas, is mainly a weapon of terror, to inflict fear on your “enemies”. It is used by governments to punish their populations for opposing government policies and daring to take to the streets in protest.

By using poisonous gas on their people the powers that be are trying to terrorise you, to hurt you enough that you will cease and desist, that you will stop resisting their control and kneel down in submission. This is a form of state terrorism and must be identified as such.

I live in Eritrea, a country that is vociferously labeled a dictatorial police state, a supporter of “terrorism” even, by the human rights mob. Yet in almost 30 years of independence, the Eritrean government has never once used poisonous CS gas against the Eritrean people. Not once. Eritrea is the only country in Africa, one of a few in the world even, to have never done so.

The use of poisonous gas on the field of battle against soldiers and civilians alike has been outlawed as a barbaric, inhumane act by international treaty yet so-called “democratic governments” use it against their own people at the drop of a hat.

Recently a few brave souls in the USA have raised calls for the abolition of the use of poisonous CS gas, “tear gas” as the media fallaciously calls it, by the police and army against the American people taking to the streets to demand an end to police murders. As expected even the so-called “liberal” politicians are not willing to support these efforts to end this inhumane, illegal practice. Under the rules of “population control”, maintaining “law and order”, the use of poisonous CS gas must and will be continued.

It's all about “protecting private property” as the hysterical ravings of the media and politicians so aptly demonstrate. The militarized police forces can kill with impunity, commit Crimes Against Humanity by using poisonous gas on the people with a little protest for years but let a few protesters break windows or loot stores and their howls go off the charts.

Back in 1990, a fearless journalist named Doug Valentine published what is one of, if not the most, authoritative sources on the Central

Intelligence Agency. At the end of his book, entitled “The Phoenix Program” which details how the CIA tried to use “population control” in Vietnam to prevent a national liberation struggle from succeeding, he predicted that one day the USA would see militarized police using armoured vehicles to suppress dissent just like the CIA has directed around the world. Today that prediction has become an everyday reality in the streets of America, with rubber bullets, batons and poisonous gas backed by armored vehicles being used against protesters on an almost daily basis.

These days just by looking you can't tell Bogota, Columbia from Portland, Oregon.

When people ask me if I ever think about relocating from here in Eritrea back to the USA all I have to do is turn on the TV and see what the National Security Establishment has done in the USA, with brutality and state terror in action across the country.

No matter the economic damage done to Eritrea by UNjust Sanctions or the damage done by western industrial instigated global climate disaster the choice for us is easy. We prefer to live in a humane country where our leaders put the needs of the people, with the poorest coming first, at the head of their agenda. No state terrorism in the form of poisonous gas used against our people, not once.

Thomas C. Mountain is a historian and educator who has been living and reporting from Eritrea since 2006. He can be only be contacted at