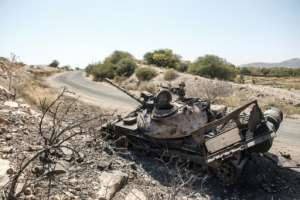 With the failure of the US backed TPLF Terrorist coup attempt against the democratically elected government of Ethiopia the USA is facing it’s greatest strategic blunder since losing Iran in 1979.

The Ethiopian Army and its allied militias have in the last 10 days of fighting regained all the territory it lost in several months to the TPLF Terrorist coup attempt. By all reports from the front lines the TPLF Terrorists are on the run with thousands of their conscripted fighters heeding Ethiopian PM Abiy’s call to surrender.

Ethiopia was once the USA’s “Policeman” in the Horn of Africa, with the strategically critical Red Sea and its chokepoint gateway Baab Al Mandeb between the Red Sea and the Indian Ocean being key to control of the enormously important shipping lanes between Europe and Asia. Statements made repeatedly by the Ethiopian government have made it abundantly clear that there is no going back to a neo colonial relationship with the west and that Ethiopia has turned to China for economic and political support.

To make matters worse the US General in command of their base in Djibouti, lying at the entrance to the Red Sea, made it clear that the US was prepared to attack Ethiopia from Djibouti, leaving Ethiopia little choice but to quietly begin preparations to force Djibouti, economically dependent on Ethiopia, to close down this threat.

At one point the western neo colonialists unleashed the full force of their media lackeys to try and undermine Ethiopia’s democratically elected government, with CNN broadcasting a fabricated claim that the TPLF terrorist forces were on the outskirts of the capital Addis Ababa.

Slanderous fabrications by the western media backed by the UN and the Human Rights Mob of “genocide” and “aid blockades” in the home province of the TPLF terrorists were shot down by no other than the UN’s own Human Rights clique in a report issued in cooperation with the Ethiopian Human Rights Commission.

The recent rapid advances on the battlefield by the Ethiopian Army led by PM Abiy Ahmed have pretty much silenced these pack of presstitutes and imperial lackeys and left that “Blinken Liar” being “alarmed” by these developments. Now that it is clear that it is no longer IF but WHEN the TPLF terrorist clique will be defeated militarily the LiarsForHire in the western media, the UN and the Human Rights Mob have grown remarkable silent.

Of course the military defeat of the TPLF terrorist gang is not the end of this problem for they saw the backbone of their army defeated mainly by the Eritrean intervention in November of 2020 at the request of PM Abiy. The Ethiopian army had been hollowed out by the withdrawal of about 80% of its most experienced fighters when the TPLF withdrew it’s military supporters to its home province of Tigray in 2019/2020. With the weakness of the Ethiopian military being well known the US threw its weight behind the TPLF coup attempt in November 2021 thinking that with a successful attack and capture of the Ethiopian Army’s main national arms depot in Tigray the TPLF terrorist clique would have little opposition in marching on the capital Addis Ababa and overthrowing PM Abiy’s government.

What they didnt take into account was Abiy Ahmed’s close relationship with Eritrea and its President Issias Aferwerki, who, at Abiy Ahmed's request, quickly mobilized Eritrean mechanized and artillery brigades into Tigray that destroyed the backbone of the TPLF’s fighters and leadership in a matter of a little over two weeks culminating in the wiping out of almost 80% of the top leadership of the TPLF with the capture of the capital Mekele at the end of November 2021.

Though their army was defeated almost 100,000 TPLF fighters survived and melted away with their small arms back to their villages and communities. Knowing the futility of trying to fight terrorists on their home soil without the active support of the Tigrayan people PM Abiy withdrew his troops from Tigray and called for a unilateral ceasefire.

The point of doing this was to force the Tigrayan people to experience first hand just how corrupt and brutal the TPLF terrorists really were and to let them learn the hard way just how destructive to the interests of the people of Tigray the TPLF was.

With a mass wave of forced conscription and child soldiers the TPLF mafia assembled a large armed force and began invading the neighboring Amhara and Afar regions.

This resulted in an unprecedented outpouring of Ethiopian national pride and support for PM Abiy’s democratically elected government and when Abiy Ahmed took direct personal command of the fighting the TPLF terrorists suffered major losses in territory and personnel. It is expected that with in a matter of a couple of weeks the Ethiopian Army and supporting militias will once again be on Tigrayan soil with the imminent military defeat of the TPLF terrorist forces.

The main question remaining is what will the people of Tigray do? After seeing their children dragooned to be cannon fodder for the TPLF and slaughtered in their thousands will the Tigrayan people turn against the TPLF, remain silent or even continuing a reduced level of support for them. Until this question is decisively answered by the actions of the Tigrayan people themselves peace in Ethiopia is not assured.

The one thing that is clear is that the US has seen its Ethiopian bastion of neo colonialism turn against it and as so many Ethiopians at home and in the diaspora have made clear “Ethiopia Will Never Kneel Down”.

I have long predicted that the day the USA loses control of the strategically critical Red Sea/Baab Al Mandeb marks the beginning of the end of Pax Americana’s dominance of the world. With this blunder against Ethiopia the USA has shot itself in the foot, leaving itself increasingly weakened and no longer viewed by the people of Africa as an omnipotent force that can do what it pleases.

Thomas C. Mountain is an educator and historian with a specialty in the Horn of Africa going back almost 40 years. You can reach him at thomascmountain on twitter or thomascmountain at g mail dot com