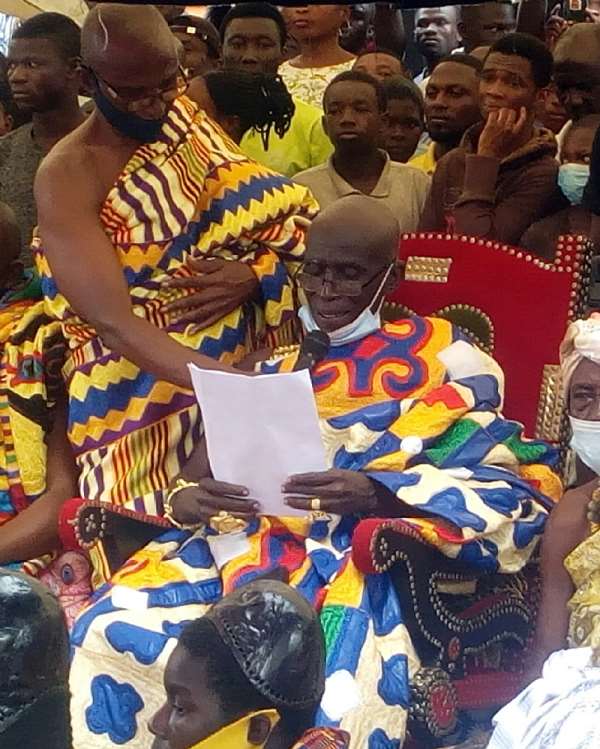 The Chiefs of Ahafo Region have eulogized the President of the Republic for instituting policies that have impacted positively in the lives of their people.

Their statement was made when the President His Excellency Nana Addo Dankwa Akufo - Addo accompanied by some ministers paid a two - day working visit to the region to inspect and commission projects of the government.

Addressing the President and his team at Goaso, capital of the region, the Paramount Chief of Goaso Traditional Council, Nana Kwasi Bosomprah said the creation of the region by the New Patriotic Party (NPP) led government has been a blessing to them due to how development has begun thriving in all sectors.

He explained now the region which has contributed and still contributing massively to the growth of the country per the quantum of gold, timber, foodstuffs among others it supplies and was receiving less of the national cake can boost of getting development due them kind courtesy President Akufo Addo.

" I can't say all is well with us but we are better under Akufo Addo's regime " he stated.

At Kenyasi, capital of Asutifi North the President of Kenyasi No.1 Traditional Council, Nana Osei Abiri (II) on education explained the introduction of the free education policy at the Senior High School (SHS) level has offloaded the financial burden parents in the region endure before enrolling their wards.

He said it was not easy for most parents in the region to secure secondary education for their brilliant children after basic education because they are mere farmers who earn little.

He further mentioned that the bringing back of teacher - nurse training allowance which was sidelined by the previous government has brought back smiles to parents and students.

Speaking on behalf of the Chief of Duayaw Nkwanta the capital of Tano North, Nana Buasum Basuah, Nkosuohene touched on the benefits farmers in the region have derived from the various farming policies instituted by this government which has made farming more attractive.

According to him, now the rate at which the youth in the region are engaging in farming being either crop or animal is mind-blowing due to how President Akufo Addo has branded farming so he needs to be applauded.

On roads the chiefs explained, credible contractors have been assigned by the government under the auspices of the road ministry to either construct or reshape most of their roads.

Talk of employment which was a threat to the region, the chiefs gave a standing ovation to the President for bringing to bear the Nation Builders Corps (NABCO) program, youth in afforestation, and the rest to help absorb greater numbers of the youth who were unemployed.

They chiefs categorically said Ahafo Region has really benefited from this government and the people will be ungrateful not to express gratitude to the President who is steering the affairs.

" We're not in heaven but at least we're better off due to NPP policies " they stated.

His Excellency President Nana Addo Dankwa Akufo - Addo accompanied by Health, Education, Roads, Agricultural, Trade among others thanked the chiefs for commending his performance as the head of government.

The President told the chiefs and the people that governance must always be given to persons with brilliant ideas to help improve the living standards of the people just like what he and his team are exhibited making Ghanaians attest to it.

" I'm not surprised at your commendation because you've been waiting for development for long " President Nana Addo mentioned.

He assured the chiefs to expect more developmental projects to help the region which is young per the creation to catch up with the traditional ones (10 regions).

At Techimantia, a sod was cut for the construction of 40.1km Bechem - Techimantia - Akomadan road, at Bechem, a Business Resource Centre was commissioned, at Kenyasi, a 68 - bed ward, doctor's accommodation, and children's ward were commissioned among others.

Alliance of CSO petitions Parliament for audience with GNPC ...
32 minutes ago