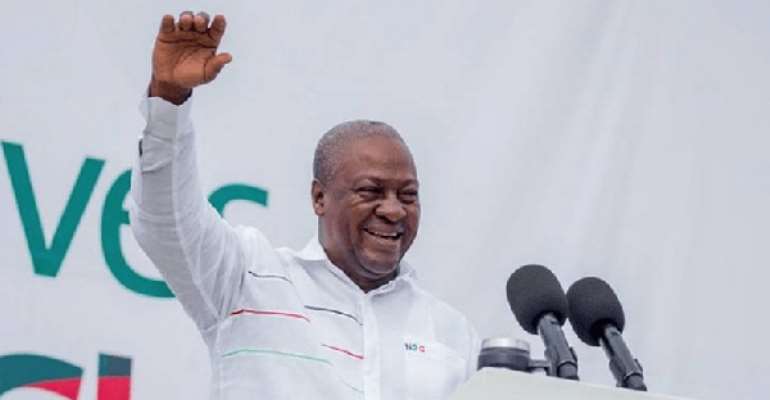 A counter group calling itself the Progressive Akyem Citizens says former President John Dramani Mahama will not apologise for endorsing what has been described as “derogatory” comments against Akyems.

This was after an opposition group from the same Akyem land demonstrated against the former President to apologise or face a ban from campaigning on their land.

Mr Mahama shared on social media, a statement authored by NDC MP Isaac Adongo, in connection with the controversial Agyapa Royalties deal, in which he described President Akufo-Addo and some government officials as ‘Akyem Sakawa Boys’.

In the said post, Mr Adongo accused President Akufo-Addo of forming a family-and-friends cartel to capture the mineral resources of the state.

The Concerned Citizens of Akyem in the Eastern Region after their demonstration on Wednesday, 9 September 2020 gave Mr Mahama a 72-hour ultimatum to apologise to Akyems or stay away from campaigning in any of the Akyem lands.

But the Progressive Akyem Citizens in a statement said “Mr Adongo in that Facebook post used the Akyem sakawa boys to refer to a few people in government who have been engaging in fraudulent acts and were pushing for another, named Agyapa Royalties deal and that he, at no point referred to we, the people of Akyem, as Sakawa People.

“It will, therefore, be an overstretch, born out of partisan political mischief, for anybody to extend and generalise such specific description of a few of our compatriots in government to all Akyems.”

The group said the attack on Mr Mahama was unnecessary and urged their fellow Akyems to channel their energies towards demanding solutions to our enormous challenges facing them rather than indulge in partisan politics.

We the members of the Progressive Akyem Citizens wish to express our disappointment and shock at the misguided emotionalism and unhealthy political infiltration by a group by name Concern Citizens of Okyeman.

We see their action as reckless and dangerous to our beautiful democracy built over the years as a country.

For the purposes of emphasis, let us state unequivocally:

1. That, this so-called Concern Citizens of Okyeman hurriedly put together for partisan purpose does not represent the entire Akyem land. They are a few politically motivated young men who have come together to do the political bidding of their paymasters.

2. As people interested in the development of Akyem, we condemn these acts of political infiltration aimed at maligning other politicians especially John Mahama of the NDC in the name of Okyeman.

3. That, we as a group wish to state in no uncertain terms that the use of the word ‘Akyem Mafia’ and other tribal related comments to refer to Ghanaian politicians in our body politics was not started yesterday and John Mahama of the NDC is not the originator. The first time we heard of Akyem mafia was when Dr Kobina Arthur Kennedy, a former campaign manager of then-candidate Akufo-Addo, published in his book entitled ‘Chasing the elephant into the bush: the politics of complacency'. In the said book, Dr Kennedy sought to describe the behaviour of certain political figures in the NPP who had surrounded Nana Akufo Addo who, according to him, caused his 2008 presidential defeat through their mafia works. This gave birth to the AKYEM/KYEBI MAFIA tag on some few NPP power brokers. Where was this group? What has changed today? Is it that they endorsed the Mafia tag because Dr Arthur Kennedy was a member of the NPP or it espoused the political might of those few Akyem political power brokers? Isn’t this ridiculous?

4. We also want to state clearly that the post on Facebook which was only republished by Mr John Mahama has the member of Parliament for Bolgatanga Central as the originator.

5. Why have our brothers decided to crucify Mr John Mahama who only shared a comment by somebody? Is this a case of let’s hang the dog and give it a bad name?

6. For the records, Hon. Adongo in that Facebook post used the Akyem sakawa boys to refer to a few people in government who have been engaging in fraudulent acts and were pushing for another, named Agyapa Royalties deal. He, at no point referred to us, the people of Akyem, as Sakawa People.

7. It will therefore be an overstretch, born out of partisan political mischief, for anybody to extend and generalise such specific description of a few of our compatriots in government, to all Akyems.

8. Such a reckless Generalisation, triggered by His Excellency Nana Akufo-Addo, and inciting this NPP group only seeks to further divide us as Akyems and create unnecessary tension in our Republic.

9. Rather than showing such blind Solidarity to a few of our Powerful kingsmen in Government, we will advise our compatriots to channel their energies in advising them to behave in a manner that brings honour to us, the citizens of Akyems.

10. Again, We demand no apologies from Mr. John Mahama since he has committed no wrong.

11. We wish to tell our Akyem brothers that there are other pressing issues confronting the various communities in Akyem area and we expect our brothers to channel our energies towards demanding solutions to our enormous challenges.

12. We expect all of us to judge all political parties by the content of their manifestoes rather than clutching on tribal sentiments that may destroy our peaceful coexistence as a people.

13. Consequently, we will demonstrate in the coming days to show our protest against a few of our compatriots in government!!

We thank everybody and wish that our friends will cut this pettiness and fight for the welfare of our Akyem land.