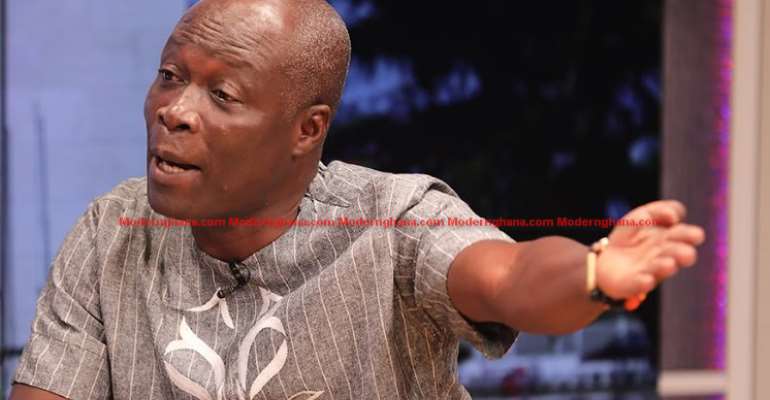 The Odododiodoo MP Nii Lantey Vanderpuye has said the Concerned Citizens of Akyem in the Eastern Region, who organised and took part in a demonstration against former President John Mahama on Wednesday, 9 September and demanded an apology from the flagbearer of the National Democratic Congress (NDC) to the people of Okyeman, for sharing on his Facebook timeline, a statement authored by opposition MP Isaac Adongo are all “useless boys.”

“Why are they [Concerned Citizens of Akyem] taking the ‘Akyem Sakawa Boys’ [comment] out of context?” Mr Vanderpuye asked in an interview with Valentina Ofori-Afriyie on Class91.3FM’s ‘The Manifesto’ segment of the 505 news analysis programme on Wednesday evening.

“They should read the whole thing and talk about it”, he said, adding: “This useless incitement doesn’t help anyone in this country”.

“It’s so useless”, the former Minister of Youth and Sports fumed, blurting out: “The boys who did this thing are useless boys who are being used”.

“We’re getting tired of this nonsense in this country and some of us are ready to face them”, the opposition MP dared.

The call by the Okyeman youth on Mr Mahama to apologise to Akyems followed a complaint made by President Nana Akufo-Addo, an Akyem, to the Catholic Bishops’ Conference last week, to call out his opposition number for endorsing, in his view, Mr Adongo’s denigrating comments about Akyems.

Hon. Adongo in a post referred to President Nana Akufo-Addo and some members of his government as ‘Akyem Sakawa Boys.’

Mr Mahama, in a riposte, however, said the President had no moral right to complain because he had the penchant of calling people names.

Mr Mahama cited Mr Akufo-Addo’s reference to President John Evans Atta Mills as “Prof Do Little” in the past, and to another person as “Simpa Panyin” during his days as opposition leader.

Mr Vanderpuye said the follow-up call for an apology by the Concerned Citizens of Akyem is untenable.

“I think their call is totally misplaced and uncalled for”, he noted, wondering: “So, should I also go and organise the Ga youth and say that Nana Akufo-Addo and his people should never campaign anywhere in Greater Accra because recently the Akyem decided to virtually take away some Ga lands? So is that the kind of politics we want to do? That politicians will go and hide behind faceless people and then get them to agitate and ask people to apologise?”

“What did John Mahama say wrong?” he asked. “John Mahama reposted something that somebody else has said and you are calling on him to apologise? Why didn’t Osafo-Maafo apologise to the rest of the country where he thought that there was nothing like any national resource coming from there and, so, they don’t deserve to inherit any position in this country?” Mr Vanderpuye asked.

“Look”, he pointed out, “I have been to the Eastern Region, somewhere in the Akyem area where the School for the Deaf field has been occupied by galamseyers”.

“So, people should stop this, other than that, we are going to break down this country”, Mr Vanderpuye cautioned.

Should that kind of politics continue, the former sports journalists feared, the country could be torn apart.

“The unity of this country is threatened”, he asserted. “In fact, never been so threatened in our history than today; that people could incite their people against the rest of the country or against other tribal groups. It is unfair. This is not the country Kwame Nkrumah built, this is not the country Jerry John Rawlings, John Agyekum Kufuor, John Evans Atta Mills and John Mahama bequeathed to Nana Akufo-Addo”.

“It’s so unfortunate”, Mr Vanderpuye bemoaned, asking: “So, if today, we, the Gas, get up and say the Akyems should remove the so-called Akyem Traditional Office from Adabraka and carry it to Kyebi, will it be good?”

To him, Mr Mahama has done nothing wrong to apologise for.

“Other than that, all of us will demand every politician, every leader in this country, apologise for one statement or the other; from today. Some of us are even going to insist that some people will take a visa even to enter Accra. Why? Are we not in a united Ghana anymore? This nonsense must stop”.

“Very soon, some people will also bar some people from campaigning in another region. Yes. So, if Volta Youth get up and say because of what the government did during the registration exercise, no NPP person should campaign in that region, will it be fair? So, will Akufo-Addo go and campaign in Bole or in any part of Gonjaland? Will he go? Why do you want to virtually break down this country because of people’s selfish aggrandisement, capricious political intents? Please, I don’t want to get worked up this evening but this news is totally useless”, an angry Mr Vanderpuye said.

He then served notice to the NPP that: “If this is the politics they want to play, some of us know how to play and play it well because that’s the game they want to play, so, we shall fill their bucket, let it run over and give it back to them because they should know that they have a party that wins in only two regions, so, if we decide to make the rest of the regions impossible for them to campaign in, will they be happy? They should stop this and let us have a very issue-based campaign and let Ghanaians decide”.

LGBTQ+ Bill: You're shameful backward thinker obsessed with ...
15 minutes ago