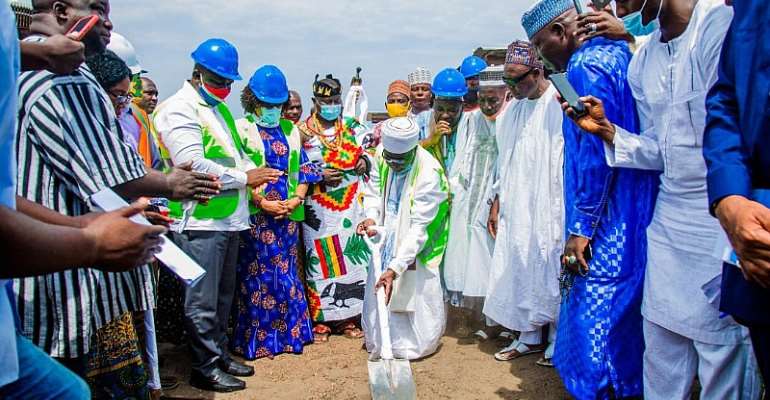 The Member of Parliament for Ablekuma Central Constituency, Hon. Ebenezer Nii Narh Nartey on Tuesday 8th September, 2020 cut sod for the redevelopment of the Sabon Zongo Market as part of the constituency’s allocation of one million dollars.

The project, which is being funded by Coastal Development Authority (CODA) under the Infrastructure for Poverty Eradication Programme (IPEP), when completed will transform the dilapidated structure into an ultramodern trading facility.

The new market, which is expected to be completed in three months, will significantly empower families by boosting the economic lives of residents, most of whom are petty traders.

Addressing the gathering, The MCE of the Ablekuma Central Municipal Assembly, Hon. Mariama Karley Amui, indicated that construction of the new market was an incontestable proof of the commitment of President Nana Addo Dankwa Akufo-Addo to ensure that Zongo communities are properly developed as promised by him.

She further indicated that improvement of the dilapidated market has been long overdue, a situation that has compelled some traders to move to other places in the constituency to sell their wares. She called on leaders and members of Sabon Zongo community to give the contractor all the needed support during construction.

She also said, “let’s support the President to deliver on all the good initiatives he is undertaking for Ghanaians".

Speaking on behalf of the Chief of Sabon Zongo, the General Secretary of Mallam Baako Family, Seidu Musa Baako stated that construction of the market was a dream come true.

According to him, sod was first cut for the project in the First Republic after which it was abandoned. He thanked His Excellency Nana Akufo-Addo for prioritising the welfare of residents of Sabon Zongo.

He expressed gratitude to the President for the establishment of CODA and the Ministry of Inner Cities and Zongo Development, adding that the two entities have made a dramatic transformation in their lives. He called on all stakeholders to cooperate with the contractor.

On his part, Hon. Narh, MP pointed out that construction of the market was in fulfilment of a promise made by the President to give Sabon Zongo a modern market. According to him, for a long time the market received no attention, emphasizing that the current structure was put up in the era of the Late C S Crabbe and Okuley Nortey, both former NPP MPs.

Hon. Narh assured that ongoing construction of roads in the constituency will continue from where it paused. He stated that priority will be given to current occupiers in the allocation of stalls when the market is completed.

He stated that, in line with the local content policy of CODA, the contractor will be required to recruit artisans and laborers for the project from the constituency.

He also informed that CODA has approved funding for the construction of an ultramodern market at Sukura, a neighboring community in the constituency.

He referred to the Free SHS initiative of this government as one of the most impacting initiatives and urged all residents to take advantage of it since education is the ultimate equalizer. 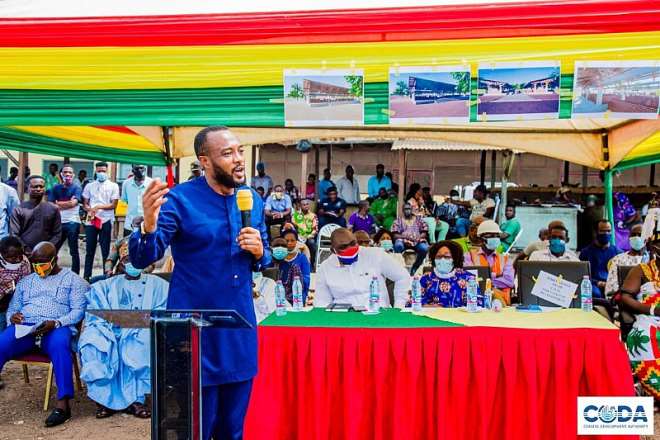