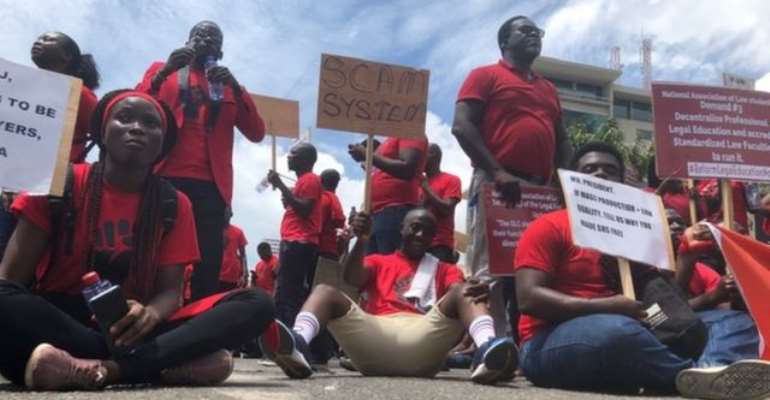 The National Association of Law Students in the country says the largest opposition NDC has shown empathy in the challenges confronting legal education in the country, than the ruling NPP per their manifestos.

The Law Students believe the opposition NDC brings down legal education reform to a choice between “certainty now‟ or “hope in the future‟.

“NALS notes that NDC’s succinctly put message simultaneously gives hope and certainty, and portrays the NDC as more caring about the legal education crisis, as at least having understood and committed to resolving the problem, as well as showing NDC as more interested in the horrific experience of the #RedMonday demonstration held on October 7, 2019 by law students across Ghana, better than the ruling NPP,” the NALS said in a statement on Wednesday.

Also reacting to promises on law education by the ruling NPP, the association noted: “NALS is disappointed that the ruling NPP government is not eager to pursue the required short-term solution of legislation, which if passed, eradicates the same issues within the short-time. NALS did not expect the NPP not to understand the problems considering the level of engagement we had with the NPP majority in Parliament, the Office of the Chief of Staff at the Presidency, the Attorney General and Minister of Justice, and the President of the Republic of Ghana”.

“In the light of past assurances and statements, which, hitherto, amounted to outright deception (see highlights in Editors‟ notes below, including statements in the current session of Parliament), NALS concludes that the NPP promise is not reflective of developments, is very awkward, misleading, retrogressive, is a very weak promise, giving a cause to be very worried than excited and therefore neither reassuring nor justified to resolve this matter,” the statement added.

Your MMDCE list plagued by inequalities entrenched in the du...
8 minutes ago

Chereponi: 12 arrested after vandalising properties over nom...
33 minutes ago