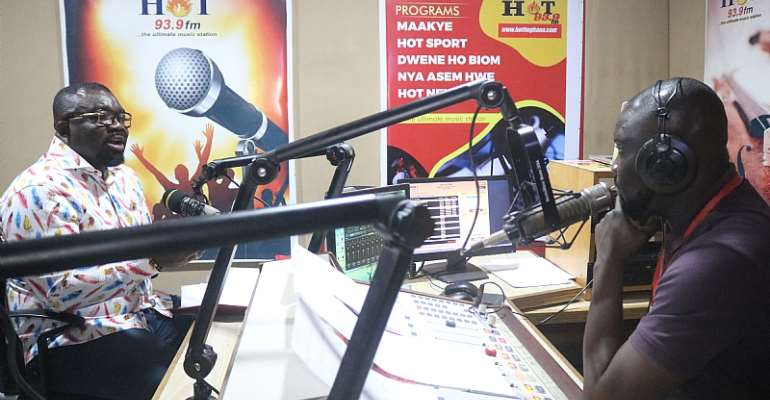 The Municipal Chief Executive of Weija Gbawe, Hon Patrick K Kumor, has outlined the several projects that have been undertaken by his administration at the municipal assembly.

In an interview on Hot 93.9 FM's ‘Maakye’ morning show, he established that Weija Gbawe is flourishing during his term of office, and detailed the projects, both completed and ongoing in the assembly.

In an attempt to manage sanitation issues in Weija Gbawe Municipal Assembly, Hon Kumor informed that eighty-four 340ml bins have been positioned at vantage points in the assembly; it is aimed at controlling the rampant instances of littering.

He, however, added that the biggest challenge with the initiative is the misbehaviour of the people in the assembly. According to the MCE, people dump refuse from their homes into the bins, which is not the purpose they are meant to serve.

To redeem the situation, he has made provisions for ‘borla taxis’ which are designed to go round and empty the bins on a daily basis, to ensure a very clean environment for the assembly. Hon Kumor also informed that he has supplied sanitation facilities to Oblogo Kindergarten block at Tetegu, an Islamic School at Mallam Gbawe, Djoma, and Weija Presby Junior High School.

A fence wall has been erected around the Gbawe Methodist School to ensure the safety of the pupils in the school. He added that the crime rate is relatively less under his term in office, due to the illumination of the streets with lights at points of crime incidence.

In terms of infrastructure and amenities, Hon Patrick Kumor revealed that mono-desks and dual beds have been provided to the schools, adding that the excess was given to schools outside the municipality.

“In relationship to furniture and computers required by the pupils, I can say that everything has been sorted out, and Weija Gbawe is moving forward”, he said. He said that he would rate himself eighty out of a hundred, based on performance in the education sector.

The Weija Gbawe MCE accounted that four CHPS (Community Health-Based Planning and Services) compounds have been built in the municipality, with the help of Hon Tina Gifty Naa Ayele Mensah (Member of Parliament of Weija Gbawe and the Deputy Minister of Health).

He said the Akawe Hospital will undergo expansions such as a new, befitting maternity block. “To ease the pressure on Akawe, we have constructed CHPS compounds for satellite areas that will require other health posts.” The places he mentioned included Oblogo, Tetegu, and Weija.