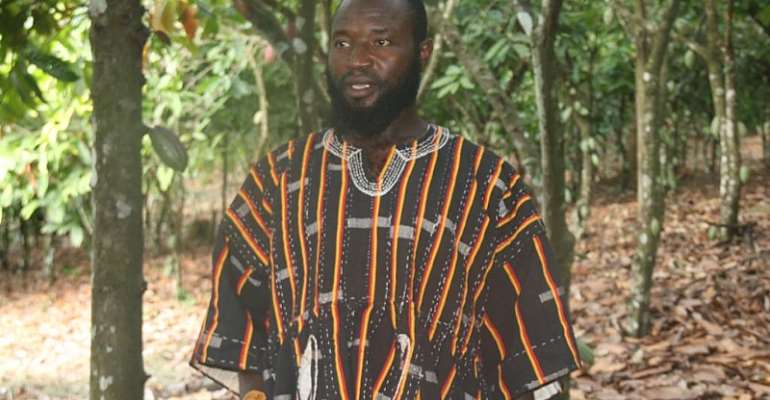 He commended the present government for introducing interventions to increase productivity on cocoa farms and improve the living standards of farmers.

He touted hand pollination as an intervention which has been helping cocoa farmers increase their yields.

Pruning, he added, has helped curtail the growth of mistletoe and the spread of disease on the cocoa trees in the region.

Mr. Agoswin was speaking to the Chief Executive of the Ghana Cocoa Board (COCOBOD), Joseph Boahen Aidoo, when the COCOBOD Boss toured his farm yesterday, (7th September) at Assin Dompim, in the Assin Fosu Cocoa District of the Central Region.

Mr. Agoswin, who declared the COCOBOD Boss as his friend, said cocoa farmers are ripping the benefits of the interventions and the instructions from the extension services which COCOBOD has introduced under the Nana Addo Dankwa Akufo-Addo government.

“I have never met Nana Addo in person but if he wasn't president, he wouldn't have appointed this Honourable as Chief Executive of COCOBOD, for him to come and help us, cocoa farmers. That is why I say he is my friend,” the Best Farmer said.

“When you look at how he has travelled all the way to this place to meet and engage with us; it all happened through the president. I have met this friend because of the president, and I commend him and the president because he has been of great help to us, the farmers.”

He said, as Chairman of the Adukrom Farmers Association he could testify that many farmers didn’t know anything about the pruning of cocoa trees before the government introduced it. Many were initially sceptical about it but today they have all accepted it because the benefits are clear for all to see.

“Today when it's also time for mass spraying, we are able to get our chemicals within two weeks to spray everybody's farm. If there is anyone in the Central Region who claims not to have received the chemicals for spraying, then that person is an ungrateful individual. I am the head of a cooperative and when the chemicals arrive, all members get theirs and other chairmen also share to their members.”

According to Abdulai Agoswin, President Nana Addo Dankwa Akufo-Addo has demonstrated a lot of love for farmers. He expressed his conviction that farmers stand to gain even more under another term of his presidency.