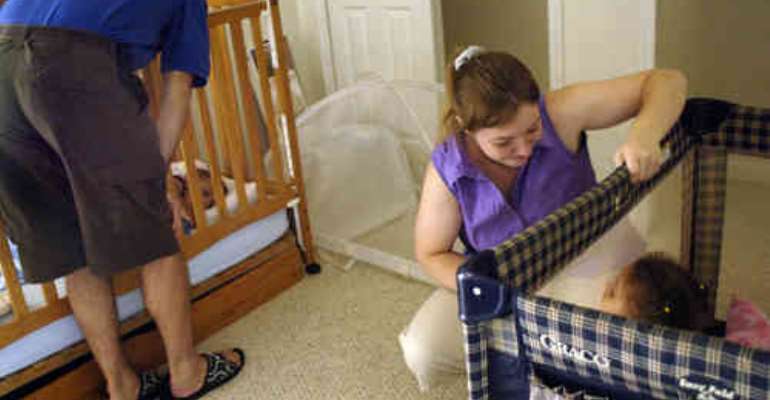 Larry and Beki McConnell pray over their adopted children before putting them down for a nap.

LARRY AND BEKI McConnell are moving to Ghana--a country neither has visited.

They're leaving their $400,000 Spotsylvania County home, their friends and their church.

The McConnells are giving up the conveniences of Western civilization to run Agape Children's Home, an orphanage in the West African nation of Ghana.

"We have very brief moments where we go, 'Are we nuts?'" said Beki McConnell, 26, in an interview at their former home in Spotsylvania's River Meadows subdivision.

Then the McConnells remember their 84 reasons to go: the 84 children who live at Agape Children's Home, orphaned by AIDS, war and inadequate health care.

UNICEF estimates that there were 1 million Ghanaian orphans age 17 or younger in 2003. Of those, an estimated 170,000 were orphaned by AIDS.

"It's a whole different world--they don't get to be children," said Larry McConnell, 49.

He and Beki, who have been married almost seven years, have always wanted children in their home.

They've been longtime supporters of Agape Gospel Mission, the Manassas-based international Christian ministry that founded the orphanage in July 2000.

The McConnells were introduced to the ministry through family. They're also active members of Christ Chapel, an Assembly of God church in Woodbridge.

In December 2003, the McConnells learned through an e-mail newsletter that Amos and Alberta Kotei, then directors of the orphanage, had died in a car accident.

"That was the catalyst," Beki McConnell said of the accident. "I e-mailed Larry and said, 'So what are we gonna do?'"

The decision was easy.

"I knew two years ago that God was calling us to Africa," said Larry McConnell, formerly the director of information technology for Alexandria-based Bowhead Technical and Professional Services.
'God's hand'

The McConnells contacted the Rev. Rick and Donna Whitcomb, international directors of Agape Gospel Mission, in early 2004 and said they wanted to help at the orphanage in some way.

The McConnells were asked to take over as the orphanage's directors, and received their appointment letter that May.

The next day, the couple got a call from Fredericksburg's Social Services Department about newborn twins who had been taken out of their mother's care.

The McConnells had been trained as a resource family, or foster parents, for about two years. They were hoping to adopt, but hadn't been contacted by Social Services.

That changed on May 14, 2004, when the McConnells met Josiah Isaac and Sarah Grace, whom they call Gracie.

"Our lives and our plans got altered drastically," said Beki, formerly an administrative assistant for Saber Communications in Falmouth.

All plans to move to Ghana were put on hold until the twins' permanent adoption was finalized in April.

In the meantime, the couple faced another obstacle to moving. Since the fall of 2002, Larry had been diagnosed with trigeminal neuralgia, a rare disorder that causes painful spasms along the trigeminal nerve, which brings sensations from the face to the brain.

Larry took medication used to prevent epileptic seizures to control the pain, but the drugs put him in a sedated, "zombie-like" state, Beki said.

He underwent microvascular decompression surgery in December 2005, but the pain persisted.

Without available medicine, a move to Ghana was impossible.

Larry had been studying healing Scriptures in the Bible when he decided to stop taking his medication.

"When Christ went to the cross he took our sin," Larry said. "He also took our disease and our pain."

Larry prayed and asked God if he would be OK without taking his medicine.

"God speaks to us in various ways," he said. "He let me know his will."

Larry said he went to bed one night without taking any medicine and awoke the next morning feeling perfectly fine.

"The only explanation was God's hand," he said.
'A walk of faith'

Since then, the couple has balanced raising Josiah and Gracie, now 2, with planning the move to Ghana.

The biggest task was selling the house, which sold for $403,500 last month.

They have to get plane tickets, visas and other paperwork squared away.

There also was the business of packing. Should they sell, give away or store most of their furniture?

The McConnells are attending a two-month international-missions training session at the Center for Intercultural Training in Union Mills, N.C., through mid-October.

And the hardest question to answer: What will they need in Ghana?

The McConnells are moving into a small apartment on the orphanage's boys campus near Accra, Ghana's capital.

The boys and girls are split between two campuses in Accra suburbs about 20 minutes apart by car.

Each campus has a dorm that houses about 40 children, with one "parent couple" of international missionaries to supervise each dorm. In addition, there is one native "auntie" for every 10 children, Larry said.

As the couple packed one July afternoon while the twins were napping, they made lists of items they still needed: a sturdy pair of sandals, hats to protect against the sun.

While Larry tried to pare down his luggage to meet the airline's weight requirement, Beki thought of soccer balls, toys and other gifts to bring the children.

"We fully expect a cultural adjustment, and that's where we depend on our Lord," Beki said.

They have a lot of questions. There's a lot of uncertainty.

But where there's doubt, they depend on God.

"It's a walk of faith," Larry said. "We firmly believe that where God guides, he provides. This is his problem--we're putting the onus on him."