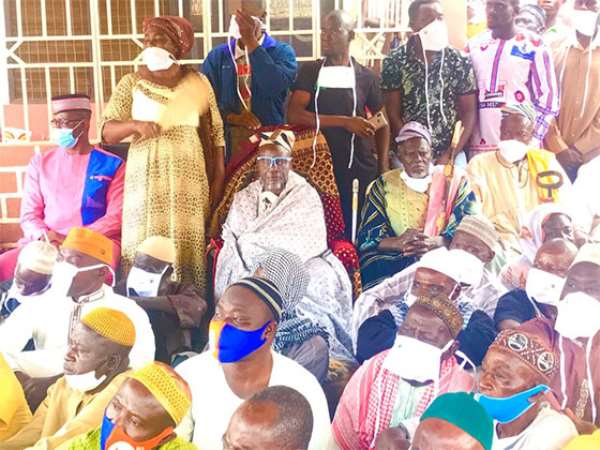 The Paramount Chief of the Wasipe Traditional Area, His Royal Majesty Wasipewura Mumuni Anyame Kabasagye II, has called on the people of Daboya to vote massively for President Akufo-Addo and the New Patriotic Party (NPP) come December 7 for honouring his promise made to them.

“President Nana Addo Dankwa Akufo-Addo fulfilled his promise he made to us regarding the construction of the Daboya/Mankarigu road during his last visit to us two years ago. He is actually 'Yine Awura-wura' and he did it to the satisfaction of all sons and daughters of our land so one good turn deserves another.”

According to the Paramount Chief, with the construction of the 80km road from Daboya-Mankarigu to Mempeasem, transportation of goods and services will become easy.

“Our people who are mostly farmers can now transport farm produce quickly to the market to avoid post-harvest losses.our people are sure to be lifted out of poverty soon as production is supported by the planting for food and jobs Programme with improved transportation due to good road network.”

The Wasipewura however appealed to government through Vice President Dr. Mahamudu Bawumia for the construction of a bridge across the white Volta river at Daboya, adding that it will open up the twin regions for development.

He also appealed for the construction of the 56km road from Busunu to Daboya and Daboya township roads.

He made the appeals when Vice President Dr. mahamudu Bawumia graced a Durbar of chiefs at Daboya in the North Gonja district of the Savannah region.

Dr. Bawumia assured the chiefs and people of the Daboya-Mankarigu that the the bridge will be constructed adding that the construction has been awarded to a contractor.

“ This is a bridge that every government since independence has said it will do and when President Akufo-Addo came here last year said we should find the money to Construct this bridge and Insha Allah we have awarded the contract and the contractor will start work soon to begin work.”

Addressing the people of Daboya-Mankarigu, Dr. Bawumia said the NPP was a visionary government and will transform the country for the benefit of all Ghanaians.

He said the Daboya-Mankarigu area has lots of potential and that government will explore all the natural resources by connecting the areas with massive infrastructure.

The Vice Presidents described former president John Dramani Mahama as a “king of cancelation” saying he canceled the Nursing Trainees allowance, Teachers allowance , among others.

He urged the people of the Daboya-Mankarigu not to vote back former president Mahama adding that he cannot be trusted with Free SHS and all the good policies of the NPP.

“ I am your son and you can count on me , give us another four years and we will transform this whole constituency so I am asking you with all humility that let us move away from the era of flying guineafowl to Burkina Faso to an era of transformation.”