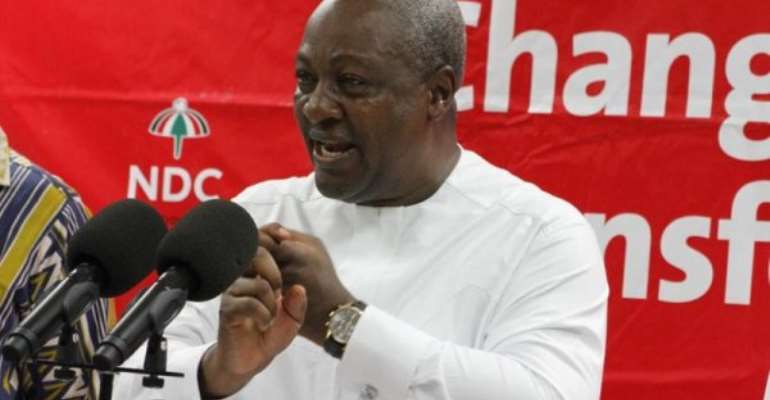 Former President John Dramani Mahama has appealed to Ghanaians to vote the Party back to power for sustainable growth and prosperity for all.

Speaking ahead of the Party's Manifesto launch on Monday, September 7, in Accra, Mr Mahama said: "Let me take this opportunity to offer some personal reflections on the political substance of this manifesto.

"You offered me the humbling chance to serve you from the highest offices in Ghana – first as Vice-President, for four years, and then as President for another four years.

"For this, I will forever be grateful, and I will fight for your wellbeing, for your hopes and for your rights with all my strength for the rest of my life.

"But since I have already been there, why run again? I know many of you ask this question – sometimes openly, sometimes in silence. Why run again? It is a fair question, and it deserves a fair, personal answer," he said.

Mr Mahama said the manifesto would provide the answer, coming from all NDC members and supporters, and men and women, who participated in its formulation.

"In all honesty, I didn't take the decision to run for a second term as President neither easily, nor quickly. I didn't jump into it. I did it out of a sense of urgency, after I began to contemplate more and more thoroughly about our vulnerabilities as a nation," he said.

Mr Mahama said a sustainable and an “ever-growing prosperity” required the building of a robust social and economic infrastructure, one that supported creativity, innovation and the production of high value-added products and services.

Mr Mahama said that was the only way to build a resilient nation and that without creating and consolidating a developed infrastructure, no nation could resist global shocks.

He said unfortunately, the current government had allegedly refused to continue on that path.

"Let me give you just one example, access to electricity in 2012 was 69.2 per cent of Ghanaians.

He said it was the NDC's mission to turn Ghana into an advanced nation as soon as possible, stating that "It is our moral obligation to be bold and to aim for greatness!"

“Good enough is no longer good enough! To prosper and thrive, we need fundamental change. We need to set our standards and expectations far higher than good enough. If we settle for good enough, we settle for a slow death of our very soul and of our pride."

Mr Mahama said: "I run for President because I want to leave a legacy, a solid infrastructure, with 100 per cent access for all. With this legacy, we will build a truly developed Ghana, at par with the advanced nations".

"I know how to do it, part of it I've already accomplished, and since I know how to do it and the current government doesn't, I feel I have the moral duty to ask for a second term. This is not about me, it's about Ghana and Ghanaians," the former President said.

Covid-19: Ghana not part of countries banned by Netherlands ...
43 minutes ago