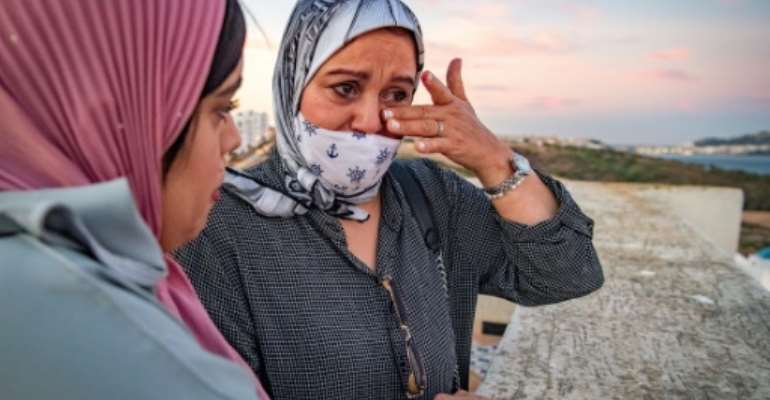 Thousands of Moroccans who once crossed into the Spanish enclaves of Ceuta and Melilla on the North African coastÂ to work each day have lost their jobs because the borders are closed. By FADEL SENNA (AFP)

Thousands of Moroccans who once crossed into Spanish enclaves on the North African coast to work every day are struggling after six months of border closures due to coronavirus restrictions.

"Everything is at a standstill," said 43-year-old Mohamed Bouhlal, who worries how to pay his rent. He fears he and his family will be thrown out of their home.

The frontiers of the two Spanish enclaves of Ceuta and Melilla, which have the only land borders between the European Union and Africa, have been shut since March in a bid to forestall the spread of the novel coronavirus.

But the pandemic restrictions have created problems.

"If the border does not reopen, I will have no other choice but to beg," said domestic worker Fadwa, who worked for the past 18 years in Ceuta, less than 10 kilometres (six miles) from her home in Morocco.

While the border post is deserted, police keep a close eye on frontier.

The enclaves are surround by high barbed wire fences, erected in a bid to stop the large numbers of African migrants who seek to cross and enter the EU by land.

Fnideq, a small shopping town just across the border in Morocco, is usually crowded at this time of year. Now it is quiet.

More than 8,000 people -- including restaurant staff and business traders, housekeepers and those working in tourism -- have lost their jobs in the two enclaves, unions say.

Spain's town of Ceuta, which along with its other enclave of Melilla are the only land borders the European Union has with Africa, are separated from Morocco by high security fences. By FADEL SENNA (AFP)

Some 3,600 have been made unemployed in Ceuta, situated just across the Strait of Gibraltar from mainland Spain, and 5,000 have lost their work in Melilla, further east along the African coast, they say.

Chakib Merouane, the general secretary of Moroccan workers in Ceuta, said the situation was serious.

Some of those unable to cross the border have been dismissed, Merouane said.

But while those who opted to stay on the Spanish side kept their jobs, they have since faced other challenges.

They range from "divorce or depression, because they chose to be stranded from their relatives to keep their jobs", he said.

Usually, crossing the border is simple. An agreement between Morocco and Spain exempts cross-border workers from needing a visa.

Fattouma Chairi, 73, has been commuting across the border for half a century.

"Since March, I have not received a salary. I am stuck at home," she said.

It is compounding wider economic misery for Morocco.

Official figures predict the pandemic could push the country into its worst recession since 1996, with a contraction of more than five percent of its GDP.

The effects of the pandemic -- combined with low agricultural yields -- are pushing a million more people deeper into poverty, in a country with a population of 35 million.

Moroccans have been barred from entering the enclaves for six months due to restrictions intended to stem the spread of novel coronavirus, and many despair of returning to work. By FADEL SENNA (AFP)

While nearly six million families needing help after loosing their incomes received state aid for three months, nothing has been done for the Moroccans who lost work due to the closure of the borders with Spain, residents say.

"I did not receive any help. I had to borrow money for six months to survive," said Merouane. "But this is no longer possible, and I risk finding myself on the street."

Many Moroccan workers have worked for decades across the border in the Spanish enclaves and now worry for their future after losing their jobs due to border closures. By FADEL SENNA (AFP)

The 49-year-old trade unionist has worked for 20 years in a restaurant in Ceuta.

As restrictions in Morocco ease and workers resume their jobs, those employed across the border are stuck.

"Everyone is going back to work, so why not us?" said Fadwa, whose income supported six members of her family, including her unemployed husband.

"The authorities are more cruel than the pandemic."

The government insists they had made efforts to stem the spread of coronavirus their top priority.

Morocco has confirmed over 65,450 cases of novel coronavirus, including 1,216 deaths.

Like all governments, the authorities have to weigh lockdown measures against the need to keep the economy alive.

But the border closures compounded an existing economic crisis, after the authorities clamped down on traders who smuggled goods between Morocco and Ceuta.

The government had promised to build a commercial zone to help ease the fallout from the loss of the once lucrative trade, but that work is at a standstill.

No date has been set for the reopening of the borders.

The Spanish enclaves of Ceuta and Melilla are the only land borders that the European Union shares with Africa. By AFP Graphics, J.Jacobsen, JJ (AFP)

But Moroccans are desperate for the border to open and to get back to their old jobs.

One worker said she was "seriously considering swimming" from Morocco to Ceuta, to slip around the fences on land.

"I no longer have a choice," said 33-year-old Samira, who can no longer provide for her family, after losing her job in the enclave.

While the frontier is blocked, people still get through.

Last month, Spanish security forces stopped 300 migrants trying to scale the fences into Melilla, with one person dying when he fell from the fence, and several others injured.

On Thursday, the Council of Europe called on Spain to improve conditions for migrants, including some 500 people crammed into an "overcrowded" bullring arena being used as a shelter in Melilla.

Spain responded by saying it faced a "constant pressure of irregular migration" but that it sought to "guarantee maximum quality" in the conditions for migrants.