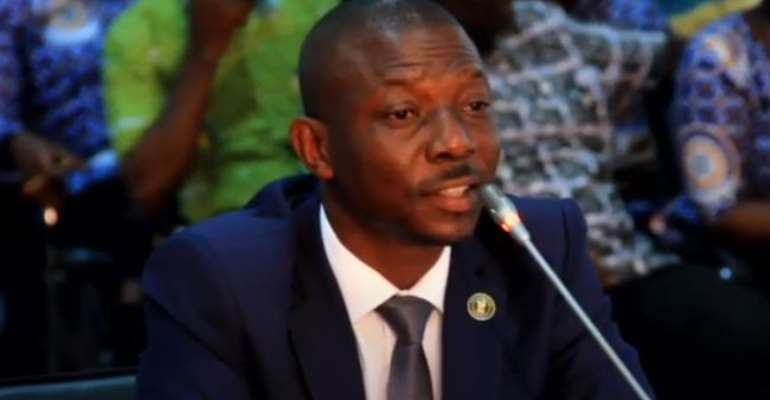 The Deputy Eastern Regional Minister Samuel Nuertey Ayertey has threatened Eastern Regional Correspondent for EIB Network, Kojo Ansah over a publication that Chiefs in Oborpa Community have accused him of insulting them.

The furious Minister sent a text message to the personal mobile phone number of the Journalist on Tuesday exactly 10:00pm that he will deal with him if he fails to retract a publication.

“Hi, This Hon Teddy, DRM. Please have you asked my side of the story before publishing to tarnish my hard-earned reputation? You better retract it almost immediately else I will deal with you” the text message read.

The Deputy Eastern Regional Minister, Samuel Nuertey Ayertey has been accused by the Chief of Oborpa Nene Agbertey Tetteh for allegedly insulting them as “illiterates and stupid” after they stopped an operator of a grader hired by the Deputy Minister to grade road from Oborpa to Klo Gyerkity area, arguing that the road needs proper rehabilitation and not mere reshaping due to its deplorable condition and the need to construct four bridges.

Subsequently, the Municipal Chief Executive for Lower Manya Krobo Simon Kwaku Tetteh went to the Community to kneel and apologize to the angry chiefs in the area on behalf of the Deputy Regional Minister.

The Journalist went to the Community to report on the deplorable state of the road and the incidents therein.

Efforts made to get a reaction from the Deputy Minister failed after the Journalist was told the Minister was not available that particular day for an interview.

Meanwhile, the Campaign Manager of the Deputy Regional Minister who is also the Parliamentary Candidate of the ruling New Patriotic Party(NPP) in Lower Manya Krobo has explained that the said “stupid” comment spewed out by the Deputy Regional Minister was directed at a young man in the Oborpa Community who spoke rudely to the Deputy Minister during a misunderstanding over grading of a road in the area and not the Chiefs in the area.

“On Monday I was with him [Deputy Regional Minister] in the Constituency and he had a call from the operator of the grader that some of the community people came to stop him. When we got there, about 17 boys and about 4 women were around, and we asked the operator and he pointed to the boys. So I didn’t let the deputy Minister talk. I went there and asked the boys why is it that you people are saying that the road should not be graded for you for easy usage, and they said for them we have to wait to let the Dademantse and co. come to show the contractor how to do the road, and I said what! What is this, please for God’s sake people want to use the road. I even encouraged them to put NPP, NDC, PNC, CPP any political meaning aside, the most important thing is the road should be in a good condition for people to use it”.

He added, “so I did the talking and when I was doing the talking one of the guys said that even this year there will not be any voting in their community, and I told the boy you are too premature, you are a fetus you don’t have to say that, you don’t know what you are saying.”

“Then the Minister came down to ask them so is it true that you people are stopping the grader or I should take it away. These are the two questions he asked. Then they said take your grader away! Take your grader away! Then I said you don’t speak like that. Then one guy there said “leave here, did you come here to insult us? ” Then the guy said that “I pay you. He was referring to the Minister. He was insulting the Minister. So the Minister said stupid boy, stop misbehaving. Then the guy said” am I the one you are insulting? The Minister didn’t mind him and went to sit in his car. So there I said that if they don’t want it in that area they should send it to the next Community.”