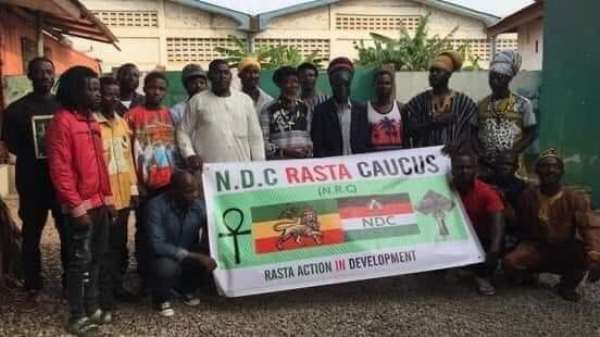 A Rastafari movement calling itself NDC Rasta Caucus has emerged to support the flagbearer of the opposition National Democratic Congress (NDC) John Dramani Mahama to win the December 7 general elections.

In a picture available to this portal, the Rastamen could be seen in a number of times displaying a banner that has the inscription; "N.D.C RASTA CAUCUS" and the supposed motto of the movement being; "RASTA ACTION IN DEVELOPMENT."

Speaking exclusively to this portal earlier today, an executive member of the movement, James Moore indicated that the movement is established to support the NDC to come to power, to address the needs of Rastafarians in the country.

James Moore also indicated that most of their members have degrees and other relevant academic certificates but because of their dreadlocks, no one is interested in employing them.

"Most of our brothers and sisters who have degrees, some have certificates but because of their dreadlocks or rasta life they are not employed," he said when speaking to this portal in a phone interview.

When further asked if the caucus will push for the legalisation of weed if John Mahama emerges winner of the December 7 elections and subsequently inaugurated as president, James replied saying; "associating weed to Rasta is wrong."

He however added that the caucus will only push for the decriminalisation of the herb so that the "ghetto youths" will feel comfortable using it.

"People think Rasta is associated with weed but that is wrong, i have friends who are dreadlocks people, they don't smoke. But let me tell you, majority of people who go to church smoke weed more than Rasta people so we shouldn't be associated with weed. But what i will pray for because we are fighting for the Rasta and the ghetto youth; we will tell our people [NDC] to decriminalize the weed..." James was quoted as saying.

Rastafarians are believers in Rastafarianism, a religious movement that began in the 1930s in Jamaica and they are not known to be participants of political activities.

Listen to the interview below;