By Shenaz Patel and David Constantin 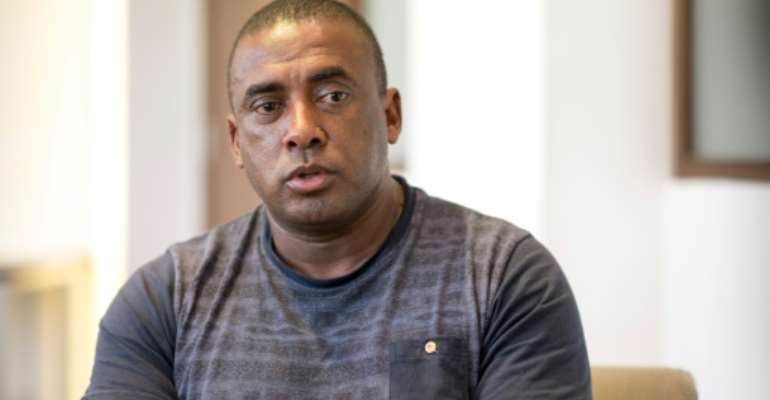 Bruneau Laurette has channelled the anger that many Mauritians feel after the catastrophic oil spill. By Fabien Dubessay (AFP)

In normal times, Bruneau Laurette spends his days providing armed escort to ships dodging pirates as they head through the Indian Ocean.

But in recent weeks, the maritime security expert has surged into a new role: the voice of a nation's anger after an oil spill soiled the coast of his native Mauritius.

The disaster occurred after a 100,000-tonne Japanese bulk carrier, MV Wakashio, ran aground on a coral reef on July 25.

It spewed more than 1,000 tonnes of oil into pristine waters that are home to mangrove forests and endangered species and are vital for fishermen and the country's tourist industry.

After the 300-metre (1,000-foot) ship split in two, the larger piece was towed out to sea and sunk, but the smaller section remains stranded on the reef.

Public anger continues to mount. On Saturday, in one of the country's biggest rallies in years, tens of thousands of black-clad people took to the streets of the capital Port Louis in response to Laurette's call for a protest over what he sees as a flawed government response.

"The number exceeded my expectations," Laurette said of the crowd size during an interview with AFP.

The outspoken Laurette -- a muscular 46-year-old with a shaved head who often wears military-style garb -- has given voice to Mauritians concerned about the long-term damage caused by the spill.

"I don't feel anger. My feelings are more of sadness, when I see the incompetence," he said.

It is still unclear why the MV Wakashio veered so close to the coast, and Laurette believes an explanation is long overdue.

He has also chastised the government for failing to recognise the gravity of the threat and for taking too long to start pumping oil from the ship, which only began leaking fuel more than a week after it ran aground.

In a crisis "we cannot carry on as we do every day," he said. "We have to adapt to the situation and evolve. But here we have a tendency to wait and wait. But we cannot do this. That's why I say there was a breakdown."

The government has vowed to seek compensation from the owner and the insurer of the ship for "all losses and damages" caused by the spill as well as clean-up costs.

But Laurette says he doesn't trust the government to hold to account local officials who may share in the blame.

Nine melon-headed whales, also called electra dolphins, washed up on the shores of Mauritius after the disaster, boosting speculation of a link to the spill. By Beekash Roopun (L'Express Maurice/AFP)

This is why he filed his own legal complaint -- dragging two government ministers in front of a court -- saying he was "aggrieved and afflicted" by the massive spill.

He also filed a complaint against the Indian captain of the ship, who was separately arrested by Mauritian authorities.

In his affidavit, Laurette described how he would go swimming in Blue Bay and take his children for picnics on the Ile aux Aigrettes -- both areas affected by the spill.

"I also used to buy fish and seafood, oysters and crabs, from local fishermen at Mahebourg."

Laurette has also called for the resignation of Prime Minister Pravind Jugnauth, a move praised by many Mauritians who took part in Saturday's protest.

Jugnauth, who took office in 2017, is the son of former Prime Minister Anerood Jugnauth.

His critics, Laurette among them, lament the fact that a select group of families have played an outsized role in Mauritian politics.

Tens of thousands took to the streets on Saturday to demonstrate at the government's response to the disaster. By Fabien Dubessay (AFP)

Protesters on Saturday went beyond the oil spill to denounce corruption, inequality and a government they say is increasingly authoritarian.

"I don't believe he is humble enough to step down," Laurette told AFP, denouncing Pravind Jugnauth's "oversized ego" and "arrogance".

In the first weeks after the oil spill, the prime minister dismissed criticism of his response and refused to apologise.

But in a televised address Monday evening, he said he had "heard" his critics and vowed to open a public inquiry into the disaster.

In the interview with AFP, Laurette described himself as "hungry for justice" and suggested his activism related to the oil spill was just the beginning of a longer process.

Hottest Photo Reports
Catch up with all the political quotes from our politicians.
Advertise here
More Africa
ModernGhana Links
Fired-up All Blacks chase Rugby Championship whitewash
Bekele reveals plan to run marathon in under two hours
Working session of the Technical Committee for the selection of beneficiaries of the Young Graduates Internship Programme in ECOWAS institutions, 2021 edition
Niger speeds up efforts to build first hydroelectric dam
Soul-searching for Boks ahead of 'special' 100th All Blacks clash
Mandela to 'House of Pain': Five epic Springboks v All Blacks matches
'God Has a Dream': top seller for Tutu's 90th-birthday auction
The race to vaccinate: why Africa is struggling to get Covid jabs
Sahara camel race glory brings boy jockey big dreams for his future
TOP STORIES