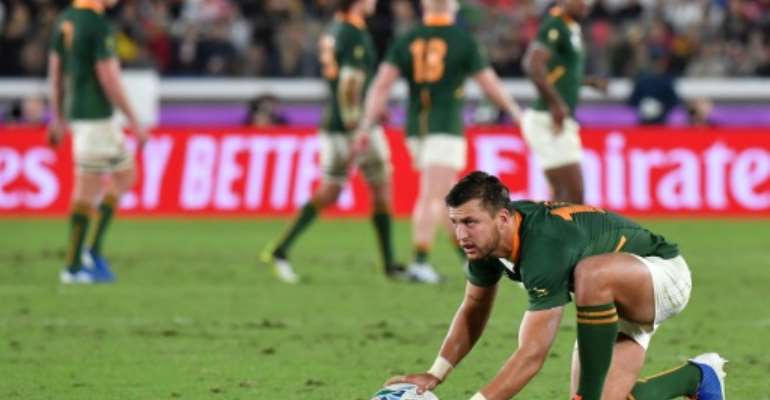 Handre Pollard has scored 457 points in 48 Tests since his South Afrcia debut in 2014. By Kazuhiro NOGI (AFP/File)

Reports claim Pollard's former side the Bulls, the Lions, the Sharks and the Stormers are set to replace the Cheetahs and the Southern Kings in the league which includes outfits from Ireland, Italy, Scotland and Wales.

The move would lead to teams from the rainbow nation pulling out of Super Rugby, a southern hemisphere tournament in which they have featured since 1996.

"It can definitely be a positive. It's difficult because Super Rugby is something dear to our hearts and we really enjoy that competition as well," Pollard said on Monday.

"But times have changed and a lot of things have changed in the last few months. Financially we are not where other countries are so we have to look after ourselves and the future of the Springboks.

"It would be very nice for South African teams to play in the northern hemisphere. It would develop everybody's style of play and rugby knowledge," he added.

The move could mean Jacques Nienaber's men leaving The Rugby Championship for a Test tournament in the north, with the French federation's president Bernard Laporte saying last week there were advanced talks for them to join this autumn's 'Eight Nations'.

"Our style of play suits the northern hemisphere a bit more than the southern hemisphere. Playing against the All Blacks is an experience you cannot explain to a lot of people and you don't want to miss out on that," Pollard said.

"It's going to be a tough one, luckily I don't have to make that decision. Good luck to those guys," he added.

Rory Kockott made his France debut in 2014 after qualifying on residency grounds. By GAIZKA IROZ (AFP/File)

South African-born former France scrum-half Rory Kockott said the Boks and the All Blacks would miss not facing each other and an aligned global calendar should be the priority.

"Two of the world greats which are New Zealand and South Africa won't be able to progress without internal competition between the two teams," the Castres scrum-half told AFP on Monday.

"Having an international rugby season collectively would be a much more productive idea. Whether or not all international teams are capable of doing it is a different question," he added.

Pollard begins his second season with Top 14 side Montpellier on Friday in a campaign which will end with the British and Irish Lions' tour to South Africa next July and August.

"It's massive. I'm not going to put a lot of focus, time and energy into now but it's always going to be in the back of your head," he said.

"Every training session, every game you play, you're going to play to make sure you are fighting on all cylinders come next year. It's a once in a lifetime opportunity. If you get selected it will be an amazing experience," he added.