Millions back at school in Europe as cases pass four million 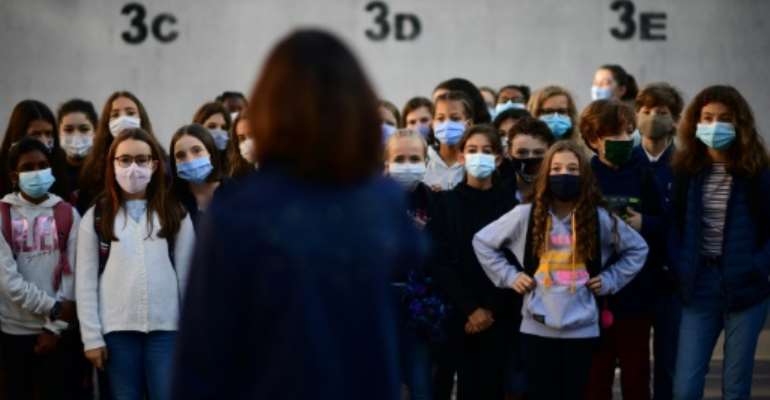 Schools reopened in Russia, Ukraine, Belgium and France, where teachers and their pupils aged 11 and older were obliged to wear face coverings. By Martin BUREAU (AFP)

Millions of mask-wearing European children returned to school on Tuesday with governments determined to get pupils back in class despite still-rising coronavirus infections which surged over four million across the continent for the first time.

Schools reopened in Russia, Ukraine, Belgium and France, where teachers and children aged 11 and older were obliged to wear face coverings, echoing regulations in place across the continent.

Lockdowns imposed from March meant many children have missed months of education, as well as time with their friends.

"I've been waiting for this moment for a long time!" 12-year-old Chahda told AFP excitedly as she arrived with her friend at school in the southern French city of Marseille.

However, the largest school district in the United States -- New York City -- announced a delay to in-person classes at public institutions until September 21, after reaching a deal with a prominent teachers' union that had threatened a strike over health concerns it felt had gone unaddressed.

In Europe, the decision to forge ahead with school reopenings comes as the virus is spreading rapidly again in many countries, raising fears that more lockdowns and disruption are to come in autumn and winter.

"I am convinced that we can and will prevent a second general shutdown," Germany's Economy Minister Peter Altmaier said, unveiling figures to suggest his country has passed the worst of its recession.

An AFP tally of infections, using official data from across Europe, showed that more than four million people have contracted the illness, with Russia accounting for almost a quarter of infections.

The virus emerged late last year in China and has now infected more than 25 million people globally and killed almost 850,000.

The Chinese city at the centre of the initial outbreak, Wuhan, took another leap back to normality on Tuesday when its almost 1.4 million youngsters also returned to schools and kindergartens.

State media broadcast images of thousands of students hoisting the Chinese flag -- a daily routine at all public schools -- despite warnings to avoid mass gatherings.

While schools attempt to get back to normal, the virus continues to play havoc with cultural and sporting events.

Tennis players faced the prospect of playing in huge arenas with no fans at the US Open. By MATTHEW STOCKMAN (GETTY IMAGES NORTH AMERICA/AFP)

The US is hosting the world's first major tennis tournament since Covid-19 emerged, but it has not been plain sailing at the US Open, where one player was sent home after testing positive and other players are grappling with eerie empty arenas.

"It's a little bit weird to play without fans and without the support and the atmosphere on the centre courts," said former champion Angelique Kerber.

The Italian city of Venice is also gearing up for the annual film festival, with about half the usual number of visitors expected and no Hollywood A-listers prepared to accept invitations from the organisers.

"It's a festival without stars because Hollywood is still in lockdown," Festival Director Alberto Barbera told AFP. "Will there be less glamour? Yes. Will there be fewer stars on the red carpet? Certainly."

Tuesday also brought bad news for everyone hoping for a swift medical breakthrough that could bring an end to the pandemic.

French pharma giant Sanofi announced that a drug in testing as a treatment for serious Covid-19 cases had proved disappointing and trials will be halted.

The drug "did not give us the results we were hoping for", said the firm's research chief John Reed.

Sanofi is also part of the global race to develop a vaccine against coronavirus, with more more than two dozen different products being trialled around the world according to the World Health Organization.

In Hong Kong, health authorities are focusing on rolling out a mass testing scheme but have seen their efforts hampered by distrust of officials following China's crushing of the city's democracy movement.

Doctors and testing firms from mainland China are involved in the programme, fuelling public fears that their DNA and data will be harvested to create a system of control underpinned by biometrics.

"I think it's a waste of time," local resident Emily Li told AFP. "The government can't convince me in terms of the effectiveness of the testing programme."

'Bubble within a bubble'

Brazilian President Jair Bolsonaro pictured during a statement on financial aid for vulnerable Brazilians on Tuesday.. By Sergio Lima (AFP)

Elsewhere, fresh economic data for the second quarter further revealed the extent of the economic devastation caused by the virus's march around the globe.

Brazil's economy, the biggest in Latin America, contracted by a record 9.7 percent in the second quarter of 2020, the official statistics agency said Tuesday.

There is uncertainty about whether the economy will recover strongly over the rest of the year because the virus is still wreaking havoc and room is running out to continue the huge government stimulus spending that has softened the blow so far.

On Monday, India said its economy had collapsed by 23.9 percent.

Only China, where the outbreak was first reported, has escaped a recession in the period, according to official data.

Flyover construction: 1 month interruption of traffic at Flo...
5 minutes ago