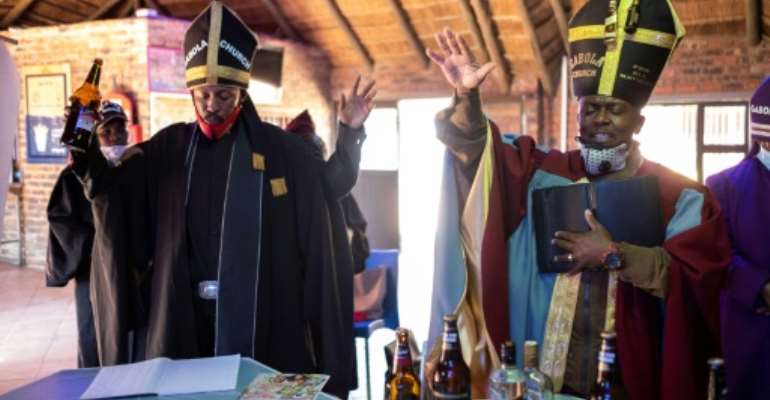 Gabola Church was founded three years ago by Tsietsi Makiti, right, to embrace people who would ordinarily be rejected by conventional churches that frown on imbibers. By WIKUS DE WET (AFP)

Bottles of their favourite alcoholic beverages in hand, gleeful worshippers walked into a thatched-roof hall and sat down to listen to a Sunday sermon.

Welcome to Gabola Church -- South Africa's unorthodox place of worship which allows its members to drink alcohol during services.

Last Sunday's service was held at Bunny's Tavern in the working class suburb of Evaton, 50 kilometres (30 miles) south of Johannesburg.

Gabola was founded in 2017 by Tsietsi Makiti, 54, to capture the unchurched people who would ordinarily be rejected by conventional traditional and evangelical churches that frown on imbibers.

Worshippers sip away as they listen to the sermon. By WIKUS DE WET (AFP)

"Jesus has taught us to fish where many fishes can be found. So in taverns, shebeens... that is where you find children of God that are rejected from other churches because of their love for alcohol," Makiti told AFP.

"We accommodate anybody who is in love with alcohol," he added, claiming the church has expanded abroad to Canada, Switzerland, Germany and Brazil.

In the hall, chairs are set a metre apart in line with the coronavirus physical distancing protocols.

Worshippers sip away as they listen to the sermon.

The improvised pulpit is decorated with bottles of gin and lagers.

After the sermon, congregants -- who all have to be over 21 years of age -- sang and danced the afternoon away.

Rolling bans on booze sales imposed by the government since March as part of anti-coronavirus restrictions had left the church services stridently dry. The latest ban was lifted in mid-August.

"Now that the ban is lifted of alcohol everything is so happy. We are celebrating!"

Rolling bans on booze sales imposed by the government since March as part of anti-coronavirus restrictions had left the church services stridently dry. By WIKUS DE WET (AFP)

He said the ban was a "bitter pill for Gabola Church to swallow. It was so cruel".

The church is not a member of the South African Council of Churches (SACC).

"We don't recognise Gabola as a church of Jesus Christ in the holy spirit. There are many organisations that call themselves 'church'," said Bishop Malusi Mpumlwana, the SACC general secretary, adding that people do have a constitutional right to assembly and association.

Gabola translates to "drinking" in one of South Africa's official languages, Tswana.

They don't read the bible and the leader said they are in the process of writing their own bible.

There is no offering or tithing collected during the service. Members just have to bring their own booze.

'God can judge us'

A follower, Portia Nzimande, is unapologetic about her decision to quit orthodox churches for Gabola.

"Only God can judge us. What we are doing here is our life. We don't owe anyone any explanation," she said outside the hall.

"We enjoy ourselves because we pray and drink at the same time," said Nzimande.

Followers reject suggestions that the gatherings are just a ruse to drink. By WIKUS DE WET (AFP)

Followers reject suggestions that the gatherings are just a ruse to drink.

"It's not an excuse... because we have members here that don't drink," said Siphiwe Mafunisa, a 42-year-old church 'archibishop', who came from one of the church's branches in Pretoria.

"So it's not for drinking only, it's just a church, a normal church, but we call it Gabola because most of us, we are drinking," she said.

For 37-year-old restaurant owner Ephraim Seliane, "there's nothing like Gabola... because you are amongst people who are not judging you, who are allowing you to be who you are."