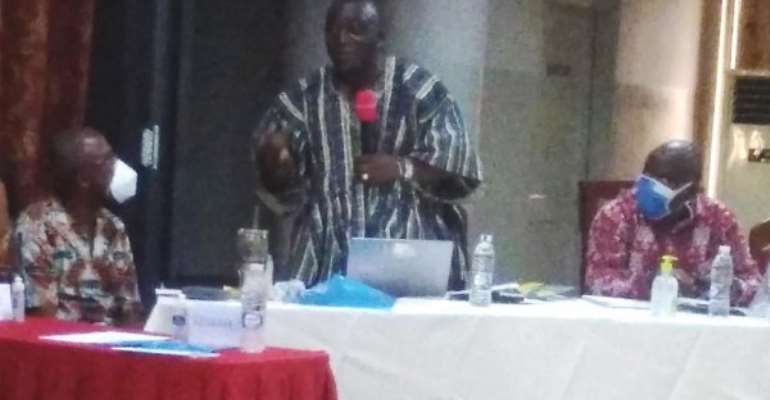 The Paramount Chief of the Essikado traditional area, Nana Kobina Nketiah V, has emboldened journalists that while applying professionalism in their work during the December polls, they should endeavour to uphold values and ethics of their profession.

He indicated that journalists could effectively cover this year's competitive Election if they were bold and courageous.

"No journalists can do good coverage of this year's elections clouded in fear", adding that they should be able to inform the public and not misinform them.

Nana Nketiah V, who was addressing journalists at the 'Media Convention 2020' in Takoradi, called for fair-mindedness, consciousness and strict adherence to professional ethics.

The programme was sponsored by the US Embassy, and organized by the Ghana Journalists' Association (GJA), bringing together selected media establishments drawn from the Western, Western North and Central Regions.

Other participants included; the security agencies and representatives of political parties.

“The 2020 Election: Role of the Media in Promoting Civility and Discernment in the Political Discourse”, was the theme for the programme.

It served as a platform for dialogue by the stakeholders on issues relating to this year's Presidential and Parliamentary Elections.

Topics discussed included, 'GJA Guidelines on Election Coverage and the various Guidelines of the NMC: Correlation and Synergies', 'Concerns and Expectations of the EC, political parties and security agencies on Media Coverage of Election 2020', as well as 'Social Media as a Tool for Information Flow - Prospects and Challenges'.

The Paramount Chief pointed out that the duty of the media was to promote the public interest and stressed that the media must not allow their parochial interests to cloud their sense of judgment as they report on political activities ahead of the December General Election.

He underscored the importance of journalists in the dispensation of multi-party democracy noting "that the journalist can make the ignorant guilty and guilty ignorant" and tasked them to report fairly and objectively while standing for the truth.

Nana Nketiah V said the media's role was to serve as a mouthpiece and guidance to the electorate by keeping them informed of the activities and Programmes of the various political parties to enable the populace make informed decisions.

He reminded journalists of the need to always present truthful, factual and unbiased information, and also ensure duty-bearers were accountable for their work and promises to the people.

Vice-President of the GJA, Mrs Linda Asante-Agyei, stressed the critical role the media had played in strengthening democracy and the rule of law under the Fourth Republican Constitution.

She said the 2020 polls, presented another challenge to the media to be alive to their responsibilities by helping to reduce needless tension to ensure stability and sustainable development.

Mrs Asante-Agyei said the Association under the 'Media Convention' project, would continue to engage stakeholders for dialogue as it sought to create a harmonious environment before, during, and after the December elections.

She lauded the American Embassy for being a faithful partner in GJA activities, noting that the Ghanaian media had the responsibility to shape the elections, promote issue-based campaigns and promote voter education.

Dr Anthony Bonnah Koomson, a media consultant tasked journalists to be passionate about their code of ethics and conduct, adding that a good journalist should carry the burden of others.

He said the media landscape was doing well and journalists were now doing more follow-ups on government projects and taking duty -bearers to task.

Furnish us with Ejura committee’s report – Families of kille...
5 minutes ago