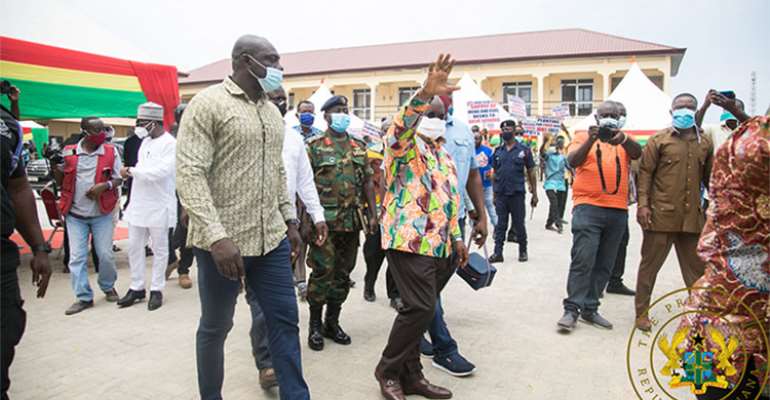 President Akufo-Addo during his visit to Anloga

President Akufo-Addo yesterday cut the sod for the commencement of works on the Keta Water Expansion project in the Keta Municipality of the Volta Region.

When completed, the project is expected to supply potable water to over 400,000 people in three areas — Keta Municipality, Anloga District and South Tongu District.

Cutting the sod in the Anlo State, President Akufo-Addo said it is one of the major promises he made in 2016, which was 'water for all people' irrespective of location.

He said the funding for the water project had been secured and everything would be done to ensure the completion of the project to bring relief to the people.

He announced that with the recent completion of feasibility studies on the Keta Harbour, actual construction would start next year, adding that to make that possible, an Executive Instrument had been signed for demarcation of lands for the harbour enclave.

The Awomefia of the Anlo State, Torgbui Sri III, assured the President of the unflinching support of the people as regards the development of Anlo and the entire region.

He expressed gratitude to the President for the creation of the Anloga District, saying “the people are solidly behind you for accelerated growth and development of the district.”

He gave an assurance that his appointment, as sole mediator in the Bimbilla chieftaincy dispute, would yield fruitful results and commended the President for the successful management of the Covid-19 pandemic, including the provision of free water and subsidized power.

Torgbui Sri appealed to the President to construct the 20-km road at Agortoe-Tregui-Bleamedzado-Bekpo, as well as the Alakple and Bomigo roads, which are in a deplorable state and also a Sea Defence at Woveme.

The €97.18 million credit facility agreement between the government and the Deutsche Bank, with support from the Italian Export Credit Agency, was approved by Parliament in March for the project.

The project is expected to, among others, have an intake facility with a capacity of 9.3 million gallons per day, a 7.7 million gallons conventional water treatment plant and a 62-kilometre (km) transmission pipeline from Agordome to Keta through Anloga.

It will also have a booster station and storage tanks, a rehabilitated and extended distribution network with approximately 80 km of pipes, the supply of 8,000 domestic metres and spare parts, as well as the rehabilitation of the existing water treatment plant to a new capacity of 78,200m3 per day.

Government to reclaim mined-out areas in Ghana
49 minutes ago