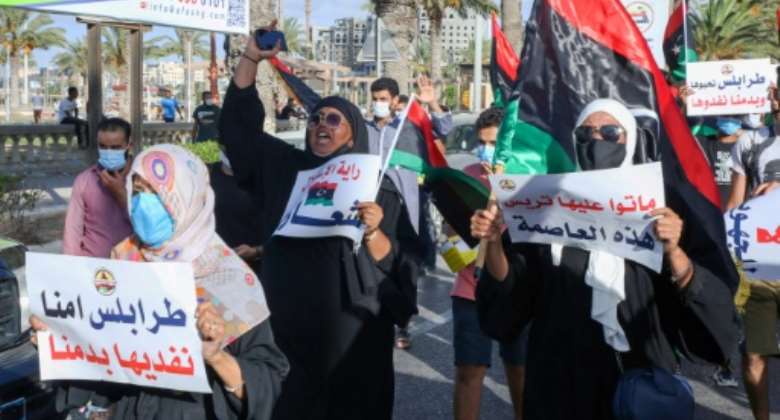 Libyans chant slogans during a demonstration over poor public services at Martyrs' Square in Tripoli on August 25, 2020. By - (AFP)

Hundreds of young Libyans protested in Tripoli for a third consecutive day to decry deteriorating living conditions and corruption amid a heavy security presence, an AFP correspondent said.

Voicing anger at extended shortages of power, water and fuel in the oil-rich North African country, the demonstrators, including teenagers and children, marched through the capital again on Tuesday and converged on Martyrs' Square.

They are also taking aim at what they say is official corruption, and some carried signs bearing slogans including "the corrupt must be put on trial."

The demonstration took place even after Fayez al-Sarraj, head of the UN-recognised Government of National Accord (GNA), sought to appease protesters on Monday by announcing he would conduct a cabinet reshuffle.

During a speech broadcast on the GNA's official Al-Rasmiya television channel, Sarraj backed Libyans' "legitimate right" to protest and said he was determined to fight graft.

"New ministers will be chosen based on their competence, abilities and integrity," Sarraj said, vowing to take "exceptional measures" to carry out the reshuffle if it were opposed.

"We acknowledge... our share of responsibility" for the deterioration of the situation, he added, but also said the crisis "has been going on for years".

Interior ministry security personnel deployed heavily at Tuesday's protest after men in military uniform fired into the air to disperse demonstrators on Sunday, prompting the UN mission in Libya to urge the government to investigate.

The war-weary country is plagued by water shortages and power blackouts that snuff out air-conditioners in the searing summer heat.

The situation has been compounded by the novel coronavirus pandemic, which has depressed global oil prices and spread in the country despite social distancing measures.

The protests began days after the country's warring rival administrations announced separately that they would cease all hostilities and hold nationwide elections.

Mankessim: Kenkey seller knocked down by a speeding vehicle ...
24 minutes ago