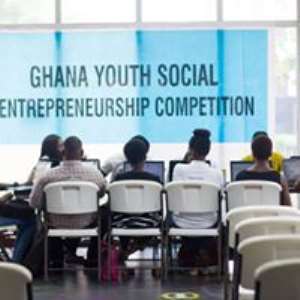 The Capitalists that Akufo-Addo and his family members pretend to be is compelling them once more to brazenly attempt to squeeze out the last ounce of milk into the throats of Ghanaians and in the process choke us all to death. Their unrelenting attempts to build for themselves financial empires with fallopian tubes deeply embedded and intertwined in Ghana’s National Treasury just to allow them sequester and pilfer Ghana’s mineral wealth resources such that even when they are out of political power, their octopus tentacles and suction pads will continue milking and feeding fat off Ghana’s mineral recourses and the National Treasury.

At a time when Ghana is trapped and drowning in high public debt distress, with Akufo-Addo’s Government alone having borrowed as much as GHC 135bn in just four years; and at the same time that Ghana is reeling and struggling to cope with the adverse economic impact and aftershocks of the Covid-19 pandemic, all that seems to preoccupy Akufo-Addo and his family members, is how they can milk the public purse and mortgage generations of Ghanaian youth into a decade and half of financial ruin and bleak economic prospects through the stinky Asaase/Agyapa mineral royalties transaction; a crooked deal which has similar characteristics as the Nana Addo NPP flagship PDS/ECG scandal.

Akufo-Addo and his family seem to be honing their skills in day-light naked thievery and pilferage designed to steal and appropriate tax payer moneys for themselves through the seeming misuse and abuse of NPP’s current Parliamentary Majority to enact inimical laws (legislation) that is customized to cover-up and “legally sanitize” their “create, loot and share” corruption capers. We all living witnesses to how they have applied this new phenomenon and corruption tactics as the same tactics were applied in the PDS/ECG caper, Kelni GVG, the galamsey “flying excavators” thievery and other corruption scandals. In all these corruption capers, Nana Akufo-Addo and his family members and cronies falsely believe that they are engaged in lawful conduct that is backed by law. We must however not forget that what may be lawful might not necessarily be right. Remember that apartheid was equally backed and justified by law. Much in the same way that the genesis of the corruption besmirched Asaase/Agyapa royalties’ deal may appear lawful because it is backed by law but the underlying implied acts of willful corruption may vitiate its legality thus making the transaction null and void, and unlawful.

President Akufo-Addo in 2018 acting through Cabinet saw to the establishment of the Minerals Income Investment Fund (MIIF) in accordance with stipulations of Act 978 of 2018. The main purpose for the creation of MIIF was to manage Ghana’s Sovereign equity interest stake in mining companies; and to facilitate receipt of proceeds arising from mineral royalties and other related income due to the State from mining operations; to provide for the management and investment of the assets of the Fund and for related matters.

By estimation US$200m accrues annually to the State as minerals royalties. Government of Ghana can therefore leverage the minerals royalties’ proceeds to raise up to US$1bn for 5 years. So the question is why is the Nana Akufo-Addo government with barely 4 months to elections rushing to mortgage up to 75% of Ghana’s mineral royalties to a questionable off-shore company registered in a notorious tax haven? The future of the youth in Ghana is indeed being messed up by Akufo-Addo, his family members and cronies.

In just 4 months to election 2020, the Akufo-Addo government hastily rushed through parliament to amend Act 978 to create a Fund Management Company established as a Special Purpose Vehicle (SPV) that will receive moneys supposed to be channeled through MIIF. In return, the SPV entity established under the name Asaase/Agyapa Royalties will on the back of expected future minerals royalties’ proceeds will raise a lump sum of up to $1bn on the London Stockers Exchange ostensibly for the Government of Ghana.

The suspicion around this transaction boils down to the fact that this Fund Management Company was incorporated in Jersey, a notorious tax haven based in the British Virgin Islands noted for accommodating stinky deals and money laundering such as being proposed.

As stinky as the deal is, every move and step towards its consummation has been shrouded in secrecy and some instances some laws of Ghana have been set-aside. For instance, the Transaction Advisors to this deal were handpicked by Akufo-Addo and family members apparently in violation of the Public Procurement Act. So, in the end, Akufo-Addo’s cousin, Gabby Asare O. Darko’s Law Firm (Africa Legal Services), Ace Ankomah’s Bentsi-Enchill Lesta & Ankomah Law Firm and a UK based White & Case Law Firm were imposed on Ghanaians as Transaction Advisors and apparently engaged on the blindside of the Public Procurement Authority. Already an amount of GHC 10m is believed to have already been paid to these law firms for offering advisory services for the deal.

The Consortium of Law firms acting as Transaction Advisors from the available trail of information in correspondences with the Attorney General, were responsible for proposing very questionable legislative amendments to the MIIF Act in order to facilitate the creation of what amounts to a smokescreen to cover-up the identities of “faceless individuals” behind their shady deals.

The amendments among others sought to create immunities for the Fund Management Company, the off-shore Company, Asaase/Agyapa Royalties. Also for Asaase/Agyapa Royalties their directors shall have perpetual tenure of office, so that no government can remove them from office even if they prove to be incompetent and are not acting in the best interests of Ghana. All these were clauses proposed by the Transaction Advisors and incorporated as amendments.

Also, the Asaase/Agyapa Royalties Company shall not be subject to the tax laws of the Sovereign Republic of Ghana according to the agreement. Asaase/Agyapa Royalties are equally not subject to the Public Financial Management Act, 2016 (Act 921). The worst aspect is that Ghana’s Sovereignty is being waived as part of the amendments, making the country vulnerable to potential law suits arising from actions and operations of the company. All these pieces of legislations were proposed by the Consortium of law firms acting as transaction advisors.

From the above scenarios, it is clear that the SPV was created as a decoy to front for some faceless power brokers in the current NPP government, notable in this case are President Akufo-Addo and his family members including the Finance Minister (Ken Ofori-Atta) and Gabby Asare O. Darko. That is why the amendments were sought to confer immunities to avoid public scrutiny of the ultimate beneficial owners of the company and other related questionable matters.

To get the public confused in the process, other subsidiary companies to Asaase/Agyapa Royalties were quickly created and registered. Interestingly, the faces fronting some of these subsidiaries are as well-known cronies of Akufo-Addo and Family. The CEO of the ARG Royalties, a subsidiary of Asaase/Agyapa Royalties is Yaw Baah who is a Senior Research Fellow at Gabby’s Danquah Institute. The Deputy CEO is one Felicia Ashley, the Vice President and head of Human Capital & Administration at Ken Ofori Atta’s Databank Financial Services Ltd.

Suffice to say that, President Akufo-Addo, his cousin the Finance Minister, Ken Ofori-Atta and his cousin Gabby Asare O. Darko, have succeeded to mortgage the future of the youth of Ghana for the next 15 years. During this period, their Asaase/Agyapa Company will earn at least $98m annually from our mineral royalties. Even when they are out of power, the Ghanaian youth will be sweating for Akufo-Addo’s generations to continue enjoying their booty for no work done.

Just add 15 years to the current age of Nana Akufo-Addo who is now 76 years and you would know that all these antics is to build a strong empire and forever control very key strategic sectors of the Ghanaian economy. The youth must rise up against this act mired in corruption!