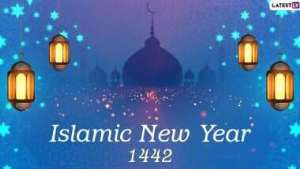 Bismillahir Rahmanir Raheem! In the Name of Allah, the Beneficent, the Merciful

Muslims across the globe observe the Islamic New Year on the first day of the month of Muharram. This year is the 1442 Islamic Hijri New Year. It is a significant month because it marks the migration of Prophet Muhammed (saw) from Mecca to Medina. And it is also one of the most sacred months of the Islamic Lunar calendar.

Muharram or Hijri New Year is celebrated by Muslims as the day symbolises two important events in the Islamic year.

Muharram is the name of the first month in the Muslim calendar. The first day of Muharram is therefore the Islamic New Year's Day and on this date the Hijra, the historic journey from Mecca to Medina began. The event provides the answer to the call of ‘hal minnasireen yansuroona’ (who is there who would help us?)

Aza (lamentation) of Imam Hussain (AS) during Muharram and Safar 1436, let us remind ourselves that when leaving Madinah, Imam Hussain declared, “Wa innama kharajtu li talabi-l islahi fi ummaati jaddi” (Indeed, I am leaving Madinah to reform the ummah of my grandfather). There can be no better guidance for us all than our responsibility to answer the call of ‘hal minnasireen yansuroona.

Islam has a calendar based on the revolutions of the Moon rather than the sun. Thus, it is only 354 days long. Islamic New Year is celebrated on the first day of Muharram, the first Islamic month. Compared to Western calendars, the Islamic year goes backwards by about 11 days every year.

Islamic New Year represents the starting point of the Muslim era as it coincides with the Hijrah, the Prophet's journey from Mecca to Medina on the first of Muharram in 622 CE. Umar ibn Al-Khattab, a close companion of Prophet Muhammad (SAW) and the second caliph, subsequently adopted Hijrah as the reference point for the Islamic calendar.

Prophet Mohammed (SAW) needed to relocate because somebody had intentions to execute him. Consequently, the Prophet chose to go to a town known as Yathrib, some 320 km north of Mecca. Yathrib is known today as Medina, in modern-day Saudi Arabia, which translates to 'the city'.

Today, centuries later, the remembrance of the tragedy of Karbala continues to draw ever-increasing crowds to the many Islamic centers round the world as soon as the Muharram crescent is sighted.

Hijrah gave freedom from suffering for the Muslims in Mecca. When the Prophet immigrated to Medina, Muslims there were indirectly saved from further persecution by the pagans in Mecca. After the Hijrah, it was then declared by the Prophet in the Constitution of Medina that Muslims are a universal brotherhood with a unique identity in faith and ideology.

The customs of Muharram vary from country to country, though they generally involve attending various religious activities, spiritual singing and religious meetings. The traditions and customs for Muharram also vary between Shia and Sunni Muslims.

The marking of the beginning of the New Year is usually quiet, unlike New Year's celebrations associated with other calendars. It is a time for Muslims to reflect on the passing of time and their own mortality. To mark Muharram, Muslims will recite Koranic verses and hold special prayers and sermons at public halls and mosques.

Let us ensure we send a loud and a clear message this Muharram that when we see the rights of people being trampled upon, we will support them to stand for their rights because that is the constant lesson we draw from the events of Karbala–refuse to tolerate genocide against Palestinian and Yemeni people. We should reject the blockade against Qatar and never reconcile with an unjust authority, whether a Muslim or a non-Muslim.

Muharram is the second most holy month of the Islamic year, after Ramadan. On 10 Muharram, many Muslims mark Ashura which commemorates the martyrdom of Hussain ibn Ali, the grandson of the Islamic Prophet Muhammad (SAW).

On the auspicious day of Muharram, may Allah bless all Muslims of the world with health, wealth, peace and happiness! May your faith in Allah always bring you peace and prosperity.

May Allah accept our efforts in answering the call of “hal minnasireen yansuroona“!