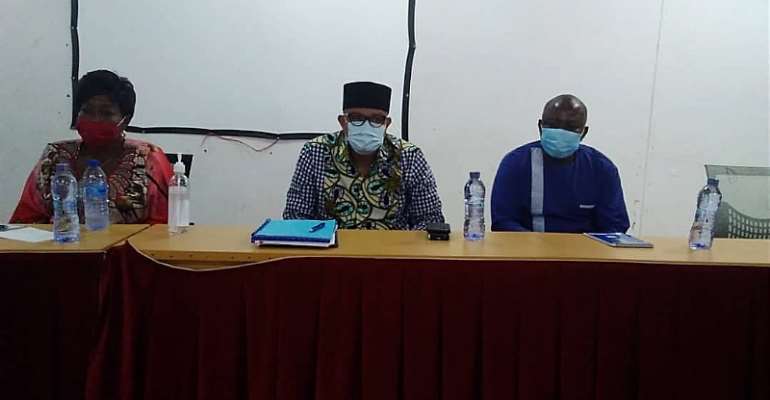 The governing New Patriotic Party has dully launched its Savannah Regional Campaign Team ahead of the forthcoming December 7, elections.

The team which is led by the Savannah Regional Chairman of the party, Alhaji Sulemana Iddrisu, was successfully initiated by a delegation from the headquarters of the party led by Madam Rita Asobayire, the first Vice-Chairman and Hon. Dr. Mustapha Hameed, the Minister for Zongo and Inner City Development.

Comprising Regional and Constituency executives, the 17-member Savannah regional campaign team has been tasked and encouraged to propagate the good works of the government, whilst working assiduously towards making the NPP in the Savannah Region a trusted choice for development.

Dr. Mustapha Hameed in a brief remark, called on the party faithful to sell the good things the NPP has done over the years to the voter, adding that, the party can win the 2020 general elections and go on to win the 2024 elections to continue the progress of the country.

The Deputy Savannah Regional Minister, Mr. Samuel Yeyu Tika, called for unity and urged all to be team players.

He appealed to team members to quickly resolve any challenge that may come in the course of execution of their duties.

According to him, the region has seen a massive improvement in road construction, jobs for the youth, and implementation of the free S.H.S. education among others; expressing conviction in the chances of the NPP to win more seats in the region.

Speaker upon the speaker, encouraged members of the team to put in their all to ensure the imminent victory of H.E the President in the coming elections.

An issue-based campaign was the watchword! The deployment of superior strategies and issue-based campaigns in their estimation will ensure the party wins majority seats and retain H.E Nana Akuffo Addo in as president, especially so, when there are empirically verifiable projects to sell.

At the gathering was a section of Regional and Constituency executives alongside the Deputy Regional Minister, Samuel Tika Yeyu, and Hon. Muhazu Saeed, a representative of the MMDCEs.

Other party gurus in the region were present to grace the occasion.

Below is the full list of the campaign Team Members:

Members of the Campaign Team:

A representative of the MDDCEs in the region.

Coordinator for the under listed special groups;

A. Coordinator Incharge of New Media:

B. Head of the Regional Legal Committee:

D. Coordinator for Security and Intelligence: