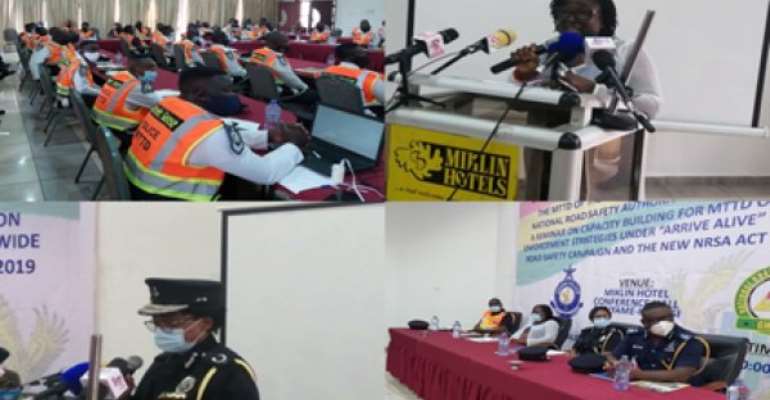 Ashanti Region has now become the hotspot of road traffic accidents in the country.

The Region recorded a total of 224 deaths through road accidents in the first half of 2020, while 1,728 people received various degrees of injuries within the same period.

Mrs May Obiri Yeboah, Director General of the National Road Safety Authority (NRSA), who made this known in Kumasi, said the figures were the highest in the country and there was the need to muster all resources and strength to reverse the trend.

She was speaking at a two-day seminar organized by the Motor Transport and Traffic Department (MTTD) of the Ghana Police Service in conjunction with the NRSA for MTTD officers on enforcement strategies under “Arrive Alive” nationwide road safety campaign and the new NSRA Act 993 of 2019 in Kumasi.

The officers were drawn from all the regions across Ghana and they will be equipped with the necessary strategies and tools to run the campaign successfully.

As parts of efforts to promote road safety awareness in Ghana, the Authority has partnered with a section of the media to run the “Arrive Alive” safety campaign which aims at using enforcement and education to change road users' behavior and advocacy to reduce laxity among policy makers and implementers.

Engineer Obiri Yeboah expressed worry about the rising spate of accidents involving motorcycles, which was increasing road traffic casualties and stressed the need for urgent steps to halt the situation.

She said though several efforts had been made in the past to improve road safety, road-traffic casualties remained a major public health problem at all levels.

She said road safety must always be data-led to be able to point out the main causes of crashes, which included over speeding, wrong overtaking, driving under influence of alcohol and drugs, inattentiveness among others.

Ing Obiri Yeboah said as an Authority mandated to develop, promote, co-ordinate and regulate all road safety activities within the country, the Authority would continue to support the MTTD with various traffic enforcement equipment and training to bring sanity on the country's roads.

Commissioner of Police (COP) Mrs. Beatrice Zakpa Vib-Sanziri, the Director General of Police MTTD, said the training programme was in line with the vision of the Ghana Police Service to become a world class police service capable of delivering democratic, protective and peaceful service.

Again, she believed the training would strengthen the professional competence of the officers of the MTTD, who were on the frontline with the much-needed enforcement strategies with the view of producing more professional and civil oriented traffic enforcement officers.

COP Vib-Sanziri indicated that the “Arrive Alive” campaign was initiated after a major crash which occurred on the Cape Coast- Takoradi highway which claimed 35 lives early this year and was hopeful it would help reduce road crashes drastically.

She used the occasion to advise officers to be professional and avoid negative practices that would drag the objectives of the campaign and the police service in general into disrepute.