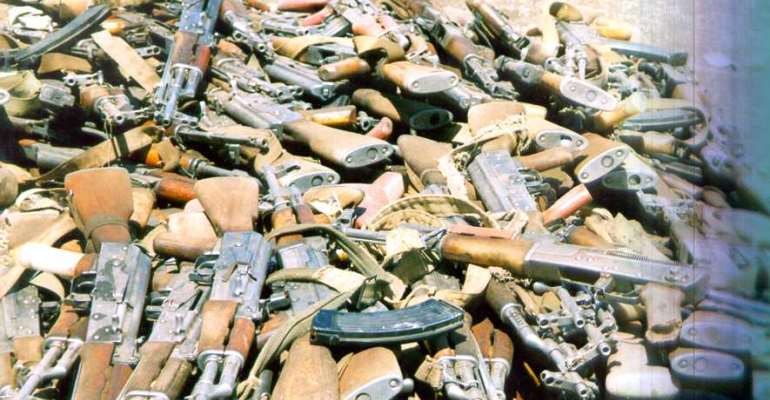 The NDC's Ranking Member of Parliament for Defence and Security, Dr Benjamin Kumbuor has called for care in attempts to criminalize the manufacture of small arms and light weapons.

He said alternative sources of livelihood such as the manufacturing of farm and industrial implements could be considered since the absence of such alternatives would only drive the manufacture of guns underground with dire consequences.

Dr Kumbuor made the call in a panel discussion on "the role of the ECOWAS Parliament on Implementing the ECOWAS Convention on Small Arms and Light Weapons" at the end of two-day sub regional workshop in Accra.

Dr Kunbour said Ghana was noted in the sub-region for the manufacture of small arms and light weapons as a vocation and a means of livelihood, adding that conservative official figures show that between January and June 2005, the Police seized a total number of 1,420 locally manufactured guns.

He noted the problem of accurate statistical information on small arms and light weapons, and said that much as the Ghana Armed Forces had a relatively good stockpile and inventory management procedures for its weapons, the same could not be said of the Police Service, particularly in the rural areas.

Also, there are yet Forest Guards and officials of the Customs, Excise and Preventive Service who could not be said to have efficient armouries throughout the country, he said.

Dr Kumbuor called for legislation and clear policy on stockpiles of small arms and light weapons and their usage in traditional institutions and as part of stool and other regalia had been one neglected.

"I must add that it is a sensitive area that requires tactful negotiations. Do remember that in some communities in Ghana, the measure of adulthood is the possession of a gun," the Ranking Member said.

He suggested to Members of the ECOWAS Parliament to make specific recommendations on the budget line for the National Parliament and similarly adapt ECOWAS Guidelines on the National Programmes of Action to assist their Parliaments to implement the ECOWAS convention on small arms.

Mr. Prosper Bani, Regional Advisor on Small Arms at the office of the United Nations Development Programme in Senegal, said the misuse of weapons brought in its wake health and education concerns as people were maimed or killed and made orphans.

He called for an increased awareness on the issues brought into the forefront in the Convention on Small Arms, and a consideration of how development impacted on national security.

Dr Cyriaque Pawoumotom Agnekethom, Head of the ECOWAS Small Arms Unit announced that the Executive Secretary of ECOWAS would visit the Parliaments in the sub-region to present the Convention to them.

The workshop recommended information sharing among the member states of the ECOWAS, and the establishment of national plans of action for the effective implementation of the Convention.

Delegates from the ECOWAS Parliament from Ghana, Liberia, Mali and Senegal serving on the Foreign Affairs, Defence and Security, Environment and Natural Resources Committees attended the workshop.

Among the issues discussed were the role and responsibilities of the ECOWAS Parliament in ensuring that trans-border crimes were curbed, the creation of the environment to promote sub-regional co-operation and harmonization of legislations.