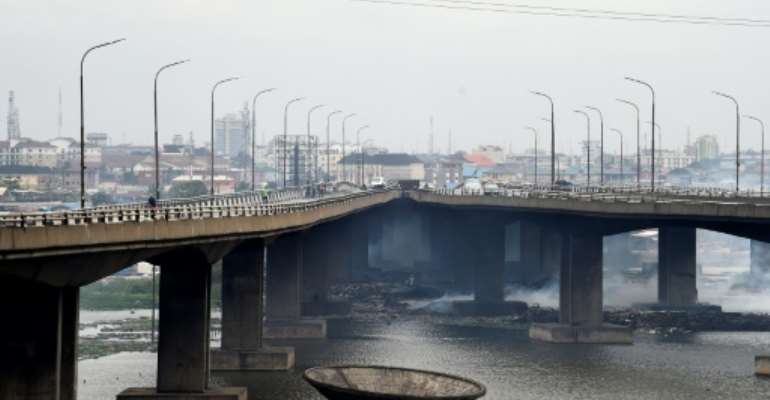 The Third Mainland Bridge is a key link to the city's business district and is going to partially closed for months for repairs. By PIUS UTOMI EKPEI (AFP)

Monster traffic jams are nothing new for Lagos, but the partial closure of the city's main bridge for repairs has made getting about an even greater ordeal for its 20 million inhabitants.

The on-ramp to the Third Mainland Bridge has become the most coveted piece of real estate in Africa's biggest city -- at rush hour, it turns into a chokepoint that saps energy, frays nerves and drives up costs.

Cyril Oyenuga is clearly exhausted as he lifts a small towel wedged into the window to protect him from the sun.

"Yesterday I spent five hours in traffic jams. It's very tiring," he said. "But I don't have a choice. I have to work."

The Third Mainland is Africa's second-largest bridge, extending nearly 12 kilometres (7.5 miles) to link Lagos Island, the business heart of the city, with the mainland where most people live.

When it was built in 1990, Nigeria's economic engine had just six million residents.

Today, its population has more than tripled and the bridge is saturated, with tens of thousands of vehicles crossing each day.

Rumours about its safety and lack of maintenance have long been part of Lagos folklore, although the authorities steadfastly denied there was any risk.

But this year, with traffic somewhat thinner due to the coronavirus pandemic, the government made a surprise announcement: it would partially close the bridge for six months to carry out repairs and prevent its "total collapse".

"If there had been another solution, we would have taken it," said Works and Housing Minister Babatunde Fashola.

But many say the bridge is all they have. The other two bridges to Lagos Island cannot absorb the extra traffic, especially as one is also partially closed for repairs.

A string of grand schemes to improve public transport have been unveiled in recent years, only to gather dust on urban planners' shelves.

A case in point is the light rail project that was supposed to relieve pressure on the bridges. After years of delays, work on the project appears to have halted completely.

Ferries are an obvious option, but a lack of infrastructure and safety worries complicate their development.

For Lagos residents forced to endure hours of traffic jams the work on the Third Mainland is proving to be a trying affair.

It now takes Kayode Lawson more than two hours to get to work when it would normally take him 40 minutes in a shared taxi.

His commute is not only much longer, but much more expensive.

"The prices have already gone up due to social distancing rules limiting the number of passengers on the bus," the intern told AFP.

A trip that cost him 100 nairas (26 US cents) before the crisis is now more than double that during rush hour.

An added headache is a 10pm curfew imposed in Lagos to slow the spread of the coronavirus. People can find themselves blocked for the night or having to risk dealing with police.

After long denying any safety problems with the bridge, officials announced urgent work to prevent its 'total collapse'. By PIUS UTOMI EKPEI (AFP)

"We have to leave for the office even earlier to have a chance to make it home in time," said Richard, a marketing representative seated in the front of a minibus hired by his employers.

Nigeria's economy has already been sagging with the direct costs of the coronavirus pandemic and its indirect impact -- a plunge in global oil prices that is hitting its main source of income.

The IMF expects Nigeria's economy to contract by at least 3.4 percent this year.

On the other hand, Rewane noted, the pain would have been only greater if the work had been put off.

"It is better to have carried out work now when many companies are remote working, schools and churches are closed and when the economy is going slowly than in six months when the cost would have been extremely prohibitive," he said.