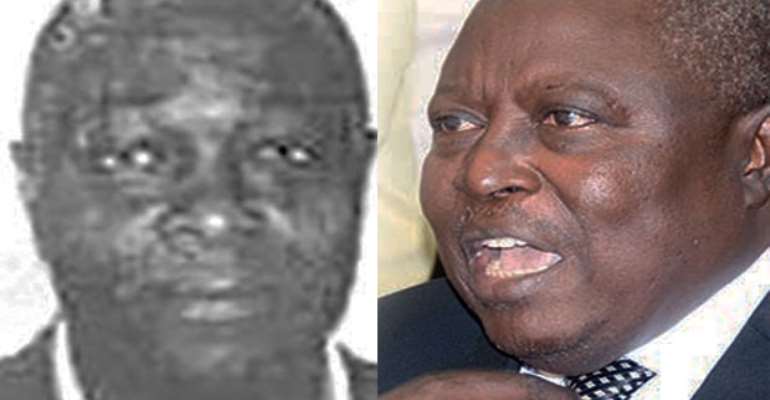 Lawyers acting on behalf of Samuel Adam Forster also known as Samuel Adam Mahama have reportedly responded to the extradition request from the Office of the Special Prosecutor (OSP) headed by Martin A. B. K. Amidu, who is investigating the 4 million Euro Airbus SE bribery scandal.

The lawyers based in London, UK, where Adam Mahama is domiciled, reportedly acknowledged receipt of the Amidu letter which is asking the former President's brother to come to Ghana voluntarily to be interrogated for his involvement in the scandal.

However, the lawyers have written to the Ministry of Foreign Affairs, saying they will be advising their client accordingly but did not state whether or not they will ask him to honour the invitation.

He reportedly received the letter and the ticket for his voluntary travel to Ghana but allegedly refused to act as requested.

The letter was said to have been delivered by hand to his mail box at his London address and sources say he later received it, prompting the action from the UK lawyers.

The former President's brother was expected to voluntarily join the stranded Ghanaians who were returning home on Tuesday on a chartered flight by government, but he was nowhere to be found on the flight.

It is still unclear why Adam Mahama, who is being sought alongside three other foreigners through an International Police Organization (Interpol) Red Notice, could not honour the invitation even though the ticket which was bought by Mr. Amidu's office and was delivered to the London home of the suspect last Saturday.

Last Friday, the Special Prosecutor (SP) 'unveiled' former President Mahama as the Government Official 1 or Individual 1 that both the United Kingdom and United States investigators referred to in the Airbus SE Scandal.

Mr. Amidu's office has been pursuing the former President's brother Samuel Adam Foster, aka Samuel Adam Mahama, described as Intermediary 5 in the investigations, and three other foreigners, who have been mentioned as individuals who collected or were paid around 4 million Euros in bribes on behalf of Ghanaian top officials for the supply of aircraft to the Ghana Armed Forces during Mr. Mahama's tenure as Vice-President and later President.

He had said in a fresh statement last Friday that he had written to the Ministry of Foreign Affairs to give Adam Mahama the chance to voluntarily join an emergency flight for Ghanaians stranded in the United Kingdom to return to Ghana on Monday, July 27, to face prosecution over the alleged Airbus bribery case.

Mr. Amidu then said in the statement that he is being attacked by persons close to Mr. Mahama who he said are saying that he (Mr. Amidu) is tainting his (Mahama) image when in fact, he said, he wanted to pursue the case devoid of politicization.

“This Office has today written letter with reference number OSP/SCR/2D/34/20 dated 24th July 2020 to the Ministry of Foreign Affairs and Regional Integration to offer Samuel Adam Foster also known as Samuel Adam Mahama the opportunity to accept to voluntarily evacuate on the evacuation flight for Ghanaian citizens stranded in the United Kingdom to return to Ghana through a scheduled flight on 27th July 2020 (sic).”

According to Mr. Amidu, “This Office's letter states, amongst other reasons for the letter to the said Ministry, that Samuel Adam Mahama's elder brother of the full blood who without doubt and the evidence available to this Office answers to the description of the elected Government Official I allegedly granted a denial interview to the Daily Graphic which published same on 20th June 2020 fortunately containing suspected admissions that he is the elected Government Official I referred to in the UK judgement.”

He said that “serving appointees of this Government have been unable to obtain the voice recording of the interview to enable this Office to confront the former President with his own admissions in the interview as answering to the description of the brother of Samuel Mahama as the Intermediary 5 (sic).”

The Special Prosecutor said he explained in the letter to the ministry on the need that the case should not be politicized and must be treated purely as a criminal matter.

“The letter also argues that it is very important for the depoliticization of this case, therefore, for this Office to request the Ministry of Foreign Affairs to ask the High Commission in the UK to urgently facilitate the voluntary evacuation of Samuel Adama Mahama to Ghana in order to assuage not only his own image but also that of his brother the former President, who accuses this Office of tainting his image by the investigation of the suspected allegations.

“This is because until Samuel Mahama answers in Court for the suspected allegations discovered by the investigation of this Office against him as a Ghanaian citizen, the unwarranted politicization of this simple corruption crime by his family and supporters will continue,” he added.

He said his letter concluded that: “Samuel Adam Mahama must be given the opportunity to voluntarily accept to return to Ghana and put himself upon the Republic of Ghana to vindicate himself and save this country of the millions of foreign exchange from the public purse that must be expended to extradite him to Ghana from the UK or any other country in execution of the Interpol Red Notice issued against him as a fugitive wanted for prosecution as published on 10th July 2020.”

“The fight against the Airbus SE (Ghana) corruption everybody agrees is not a political matter. Consequently, every patriotic Ghanaian who believes in the anti-corruption fight must support and encourage this Office to impartially get to the root of this allegation of corruption against the public purse and urge Samuel Adam Mahama to accept the opportunity to voluntarily evacuate to Ghana as a patriotic citizen of Ghana to vindicate his image and that of his family,” Mr. Amidu said.