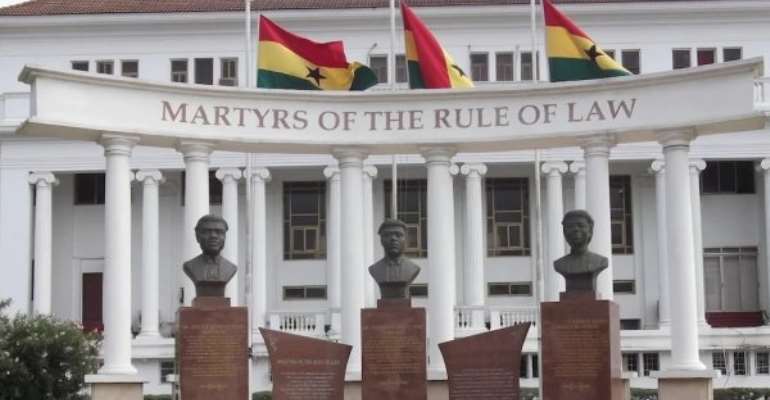 The Supreme Court, on Wednesday, ruled that there is no legal basis for a US-based Ghanaian lawyer to join Mr.Daniel Domelovo, the Auditor General and his deputy, Johnson Akuamoah Asiedu in a suit before it.

The Court held that if Professor Stephen Kweku Asare, the plaintiff, wanted to sue over the Executive action of the President, he should do so and leave out Mr Domelovo and his deputy.

It contended that Mr Domelovo and his deputy could not be joined in the suit when an Executive Action had been taken by the President.

The apex Court of the land, therefore, struck out the names of Domelovo and his deputy and urged Mr. Eric Alifo, counsel for Prof Asare, to take a cue from the bench amending the writ and leaving out the two.

It was the case of the applicant that the directives by the President was unconstitutional and must be reversed.

Mr. Godfred Yeboah Dame, deputy Attorney General, prayed the Court for the second (Domelevo) and third (Asiedu) defendants' names to be struck out of the case, explaining that it was the AG that defended public officers and institutions in all civil cases.

The Court, presided over by Mr Justice Dotse, however, ordered that the substantive matter be allowed to take its normal course.

On July 4, this year, the President directed Mr. Domelovo to proceed on his accumulated leave.

He also directed the Auditor General to hand over to his deputy who would act, while he (Domelevo) took on his leave.

But in a suit, the KPMG Professor of Accounting is praying the court for “A declaration that the President's appointment of Johnson Akuamoah Asiedu to act as the Auditor-General is inconsistent with or is in contravention of the letter and spirit of Articles 187(1), 187(7)(a)”.

It is also asking for an order “directing the President, his agents, assigns, privies, servants and whomsoever of whatever description to cease and desist from issuing directives to the Auditor-General.”