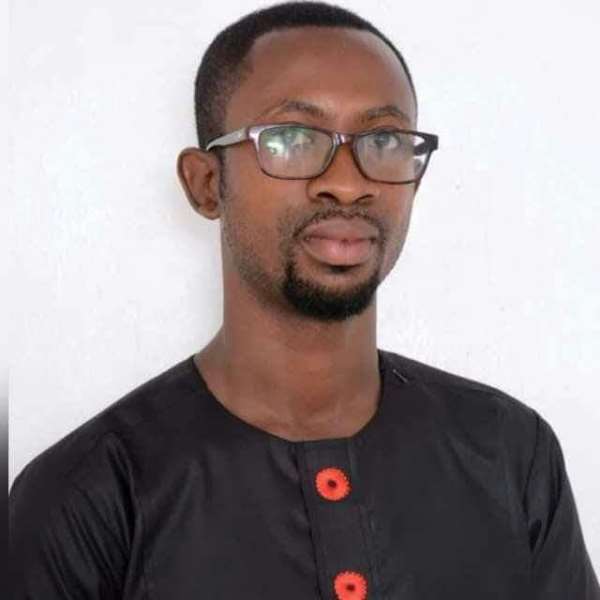 The recent alleged threats by the opposition NDC’s National Communications Officer, Sammy Gyamfi, to the country’s security agencies, especially the military and the Police as well as other utterances, continue to attract widespread condemnation by well-meaning Ghanaians.

The latest to add his voice to the unending condemnation of Sammy Gyamfi comments is Asare Bediako Seth, the Bono Regional Communications Director of the ruling NPP, who believes that the opposition NDC’s spokesperson must be called to order for his empty and hollow noises.

Mr. Asare Bediako Seth, who is popularly known as ABS, in a Press Release explained that Sammy Gyamfi and the NDC are making all kinds of ugly noises to cover-up their “harrowing defeat” awaiting them in December 2020 elections.

Find below the full text :

It is intriguing to note how the opposition National Democratic Congress (NDC) has over the period sought to work their way back to the reigns of political power through varied strategies and crude machinations.

Their morbid activities began with grave attempts to discredit and soil the first gentleman of the State, Nana Addo Dankwa Akufo-Addo, and his political appointees with indelible tags of corruption. This was followed by their sworn agenda to ostensibly hold the NPP government to its campaign promises, which promises they (NDC) castigated and never had a scintilla of faith that same will see the light of day anyway. The opposition NDC hurriedly followed up with their diabolical strategy of running down and striping off state institutions, government agencies and their actors of their hard won and time tested credibility and reputation.

The rationale for such a bracingly morbid agenda by a team of nation wreckers, we surmise, would be to frustrate and cast the ruling government in a bad light; and as well paralyze the institutions of state which are creatures of law and clothed with the mandate to deliver holistic national development and ensure strict compliance with the laws by which the State is governed.

The results of such unpatriotic acts are obvious -- they create and breed a culture of repugnance and mistrust between the citizenry and the ruling party on one hand, and a strong sense of dissatisfaction and insecurity between the citizenry and state institutions on the other hand -- and in a society like ours where the government has an uphill task of yet ensuring that a majority of its citizens get the benefit of at least Senior High School education, a chunk of the population is likely to fall prey to the illogical and deceitful maneuverings of a desperate political party like the NDC whose stock in trade has been to always manipulate and distort the facts and frantic efforts of the ruling government to their advantage.

Despite the tireless efforts by the opposition NDC to discredit and thwart the efforts of the ruling New Patriotic Party, the ship of state, ably captained by His Excellency Nana Addo Dankwa Akufo-Addo continues to sail through the turbulence associated with the high seas of national governance and has severally docked with goodies meant for the survival and wellbeing of its crew and all who look up to it for their livelihood.

Others include the settlement of heritage debts owed by the energy sector, the retooling of our Security Services, the decentralization of the Ghana Scholarship Scheme, the payment of NHIS arrears, the GPS and Digital Addressing System, the successful operationalization of the Mobile Inter-Operability System, the implementation of the Ghana Card through the NIA, the restoration of Teacher Trainee and Nursing Trainee allowances, the massive public sector recruitment nationwide, the rural electrification program, the launch and operationalization of the Year of Roads program, the massive roll out of infrastructure in Tertiary Institutions and Senior High Schools nationwide, the expansion of and prompt payments associated with the LEAP and NYA programs, the successful creation of six (6) new administrative regions, the One - Constituency - One - Ambulance program, the National Emergency Drone Service program, the agenda 88 whose aim is to see to the construction of new Regional and District Hospitals in new administrative areas, the COVID Alleviation Program ( CAP ), provision of free utilities to lifeline consumers and the 50% subsidy for non - lifeline consumers in this era of the deadly COVID-19 pandemic -- the list of the NPP government's achievements within the spate of three and a half (3.5) years is endless.

The NDC in its desperate and confused state already admits covertly that their proverbial lame horse isn't fit for purposes of issue - based electioneering, as well as back-to-back comparison of their records on solid infrastructural projects, social interventions, the economy and national governance with that of the NPP as the general elections of 2020 draw closer. Over the period, they've sought to strangle and frustrate the ruling government through some of their strategies as follows: Staging walkouts from Parliament; embarking on street protests and demonstrations against government popular policies; organizing uncountable press conferences across the country; character assassination of the President and his appointees; courting the support and sympathy of local and international corporations and institutions; and backtracking on developmental and administrative policies that required the consensual agreement of their side of the August House of Parliament, the botched referendum for the election of MMDCEs is a case in point.

When all these plots couldn't run the Nana Addo - led government aground, their only straw to clutch unto would have been the maintenance of the current voters register in its bloated and error ridden form which the New Patriotic Party made a strong case against while in opposition.

Luck eluded the NDC and the overwhelming majority of Ghanaians endorsed the NPP for a landslide victory in the 2016 general elections. Therefore, the NPP has been consistent in its call for a new voter's register, and the government of the day has made every financial and logistical resource available to the statutory body responsible for the compilation of the new voters roll.

Having tasted that historic, wrecking and humiliating defeat in the 2016 general elections while in power and with every incumbency advantage imaginable, the NDC is now more than ever bitter, suspicious, hallucinating, desperate and sensing yet another mammoth and harrowing political defeat in the upcoming Presidential and Parliamentary elections on December 7, 2020. Once the Electoral Commission successfully compiles the new electoral roll, it will be deemed that our voters register is clean and fit for purpose because all minors, multiple registrants, the deceased and non - Ghanaians who hitherto had their details in the bloated register will have same totally obliterated by the Electoral Commission.

It's for these and many other ulterior motives that the NDC is strangely bent on marshalling all manner of forces and strategies in order to create the ambience for these unlawful registrants indicated supra to get their names unto the electoral roll in order to shore up their support base in many strategic registration centers nationwide. In the recent incidence at the Ewutu Senya East Constituency where the NPP has a sitting Member of Parliament, the strategy of the NDC has been to flood the registration centers with able - bodied men and party thugs just to create fear, intimidation, pandemonium and panic, in order to ward off the majority of prospective registrants who're deemed to be supporters and sympathizers of the NPP.

It must be stated that Hon. Mavis Hawa Kumson is a major stakeholder in the activities of the Electoral Commission in the Ewutu Senya East Constituency. The credibility or otherwise of the reference document to be used in conducting the December polls will have direct consequences on her job as the incumbent MP who is seeking re-election.

The following questions are begging for answers: What can be said to have been the legitimate role of the NDC thugs and hooligans who were busy crisscrossing the length and breadth of the registration center? What was their interest in parading around and surrounding the official vehicle of the Hon. MP for that Constituency? What was the purpose of their reckless riding of motorbikes on the registration premises? When the said NDC motor riders rode and intentionally bumped into the Hon. MP's convoy, thereby scratching and mangling portions of one of the vehicles, did they know the extent of damage they could have caused if that metallic cowl were a human body? As a Member of Parliament and a Minister of State, is Hon. Mavis Hawa Koomson permitted under the laws of Ghana to wield an ammunition?

If yes, is she permitted to give a warning shot into the empty, plain atmosphere when there is an attack and threat on her life? What does the law say about potential and legitimate registrants at every registration center? If those NDC thugs wouldn't mind to ride and crash against a metallic vehicle, who knows what they would probably have done to the Hon. MP, if they had access to her life? How would the security implications and narrative have been if these avowed NDC thugs had gotten hold of the Hon. MP and tore her flesh into pieces? If the Hon. MP had lost her life in the process of that attack, would anyone have imagined the strange wave of its rippling political effect, as well as the foreseeable religious and ethnic reprisals that could have erupted given the cosmopolitan nature of that community?

We wish to state that it has always been in the genetic code of the NDC to want to dabble in illegality and exploit every means available to them in their attempts to want to flout the rules that govern public elections in this country. They should desist from encouraging and conveying people they already know aren't qualified to go and flood up the various registration centers across the country. The NPP government is mandated by the Constitution of the Republic of Ghana to enforce the laws governing the land through the various state institutions and agencies.

The NDC through their National Communications Officer, Sammy Gyamfi, can keep on blowing hot air and play the proverbial Ostrich. Their numerous press conferences and open threats to the nation's men and women in uniform will not deter the government from enforcing the law through the appropriate state institutions. The nation's security personnel are mandated by the Constitution to maintain law and order, and to safeguard life and property. We wish to assure and implore our gallant men and women in uniform that no individual can, by their attachment to any political party or through their auto imposed selective amnesia, threaten you of any form of dismissal from your jobs.

This dying minute and face saving tactics being employed by the opposition NDC to want to play on the psychology of the nation's security services in order that they may bow to their whims and caprices won't work.

We therefore encourage all legitimate citizens of the Republic of Ghana to turn out in their numbers to register at their designated registration centers. This upcoming general election will be a Ghanaian election and it's only legitimate Ghanaians who are permitted by the sovereign laws of the land to duly register and cast their ballots in order to determine who best serves their interests in the Parliament of Ghana, as well as the first gentleman in whose hands they can entrust their lives and that of their progenies, their natural resources and their sovereignty in order that he steers the affairs of the State of Ghana from the Jubilee House for another four years.

Ghana has come far. We have lived through it all. Let no one be troubled and dismayed by the hot air and empty threats of young men and women whose closest participation and experience of Ghana's battles for self-rule and our stable democracy could best be described as that acquired via text book tutelage.

Fellow Ghanaians, let's all be law abiding, and let's all collectively adhere to the rules governing the processes leading to the compilation of our new Ghanaian voters register.

Long live our Nation and its Institutions!!!