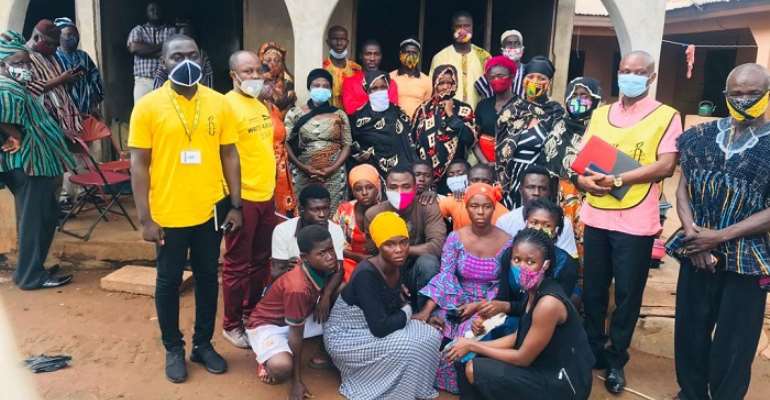 Amnesty International with the family of the deceased

Amnesty International has paid a visit to the family of late Akua Denteh, aged 90, who was beaten to death at Kafaba in the East Gonja Municipality for allegedly being a witch.

The organisation led by its country director interacted with leaders of the family and were briefed with first hand information on the circumstances which Madam Denteh died.

The Amnesty International country director, Robert Akoto Amoafo condemned the attack and killing of the deceased.

“What we have gathered here is something serious not only for her but also woman of the community she comes from and woman in Ghana who are going through violence or any sort of abuse.”

According to him, no woman or person should go through such inhuman treatment metered on the deceased.

“It is wrong we do not endorse it in any way as an organisation and we believe it's the responsibility of government , the security agencies , ministry of gender to ensure that the family get justice for people to believe that our laws work in this country.”

Mr. Amoafo called on the police to ensure that the perpetrators are arrested and prosecuted them to serve us deterrent for the residents in the community to know they cannot take the law into their own hands.

He assured the family that the organisation is committed and willing to follow the incident to its logical conclusion.

Meanwhile, the Inspector-General of Police (IGP) James Oppong-Boanuh has dispatched homicide experts from the National Police Headquarters to the Savannah region to help search for the murderers of madam Akua Denteh.

The suspects are one Sanje, who is said to have hosted one Hajia Filipina, a priestess who declared the deceased a witch.

The other suspects are one Aliu, a teacher, Bumaye, Ashley and Manafo.