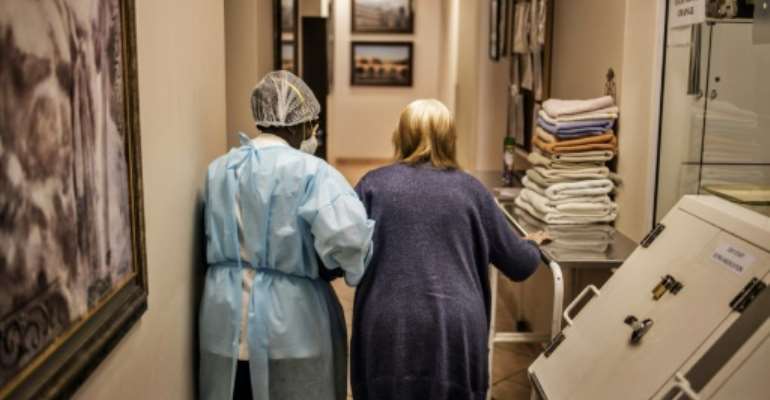 Fourteen of the 64 residents in the Casa Serena retirement home have died since the start of the coronavirus pandemic. By MARCO LONGARI (AFP)

"The sickness is around. We don't know when we're going to get it," says 79-year-old Giuseppe Tassi.

"I knew a couple of people who went to hospital and never came back."

Tassi is sitting in the lounge at the Casa Serena retirement home in the Johannesburg's district of Germiston.

The empty chairs tell their own tale of death and absence.

At the start of the coronavirus pandemic, the facility -- whose name means "serene home" in Italian -- had 64 residents.

Nearly a quarter of them have since died.

"We lost 14, some of whom have died of COVID, and others have died with COVID," said Mario Serra, the manager of the home, which caters to the Italian-South African community.

Casa Serena is just one of 17 care facilities in Gauteng, South Africa's most populous province, that have been ravaged by COVID-19.

Serra, who lives at the centre, also contracted coronavirus but recovered.

He spoke bitterly about the unequal fight to save lives.

As early as March, he imposed a rigid quarantine and other measures -- but his defences were breached by a stealthy and relentless foe.

"We were expecting people to die, as every year during winter times, but this is a concentration of death," Serra said.

"It is like walking in the sun and all of a sudden a big paw with tremendous nails scratches you from behind. You see the blood and you don't know what it was."

Most of the dedicated staff members have not left the facility since nationwide coronavirus lockdown started on March 27.

But there is little they can do for residents stricken by fear, solitude and a sense and powerlessness.

Relatives in protective gear chat to a resident through a window to reduce the risk of virus infection. By MARCO LONGARI (AFP)

The home, managed by an Italian community, includes the children of Italian World War II prisoners and migrants who came to South Africa in the 1960s and 1970s to seek their fortune.

Italian culture echoes through the home, in the language and food and devotion to family.

But visitors are only allowed under exceptional circumstances as the quarantine is still in force.

Some residents have been waiting for more than three months for a chat with their loved ones.

Watching international news, especially from Italy, has not helped their mental wellbeing.

They first witnessed the pandemic on television news early in the year, when Italian nursing homes turned to coronavirus hotbeds and thousands of senior citizens succumbed to the virus.

"At the beginning Italy was the worst one in Europe, but they eventually came out of it. The peak is only starting now in South Africa," said Tassi.

The rising incidence of COVID-19 infections renders testing at the home a futile practice.

"You treat the symptoms, that's it," confessed matron Margaret Humphreys.

"All the people in frail care have suppressed immune systems. If one has a cough and you don't pick it up, it will spread like wildfire," she said.

Residents are too scared to leave their rooms and generally refrain from any social activities.

"In the afternoon... we used to get (out) there and play cards, but now sleeping in the bed is all I can do," explained Esterina Satori, 88.

Satori had just seen her daughters for the first time since March.

She spoke with them through the window of the sitting room, and for just 15 minutes.

She and the daughters of other residents had spend several days preparing treats for the community of Casa Serena to help ease the burden on staff, some of whom have also contracted the virus.

Bellini said she focussed on the day when her entire family will be allowed to get together again.

"We will all have a big lunch together and take photographs, with a few of his friends that are left," she said.