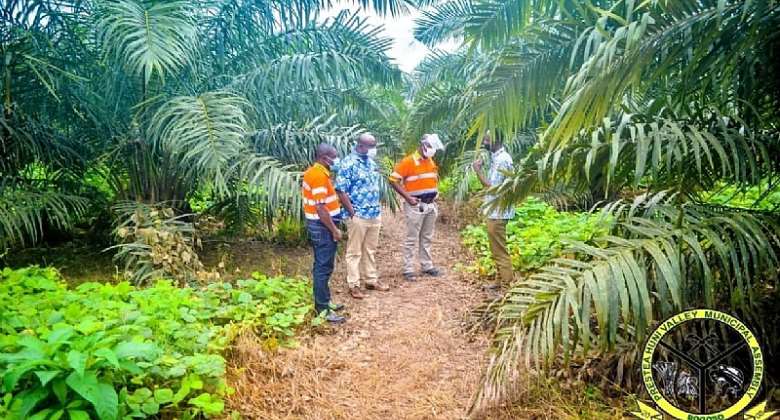 The move forms part of his vision to turn the fortunes of the Municipality through agriculture and job creation.

The MCE inspected a vast oil palm farm at Bogoso which falls under the Golden Star Oil Palm Plantation (GSOPP).

Taking the MCE round the project, the community affairs manager of GSR, Mr. Gyamfi disclosed that, the rehab project is sited on over 150-hectare tailings land, and currently has over 100 hectares of oil palm under cultivation.

He noted that GSR has for the last three years, undertaken programs to transform their former tailings dams to function as farm lands to complement their work in land revegetation and to demonstrate to stakeholders that mining is just one in a series of viable land use.

The MCE expressed satisfaction on the management and operation of the farm.

He commended the company for the community development initiative which is one of the best ways the living standards of the residents can be improved, to reduce poverty through employment generation and to promote wealth creation to place the municipality onto the path of progress and prosperity.

Dr. Dasmani indicated that through the Assembly's free oil palm seedlings distribution to farmers and the GSBPL rehab project, raw materials will be available to feed the oil palm processing factory constructed by the Member of Parliament for the area Hon. Barbara Oteng-Gyasi.

He appealed to the company to make available data on the project and emphasized that his outfit will count on their support for a similar initiative.