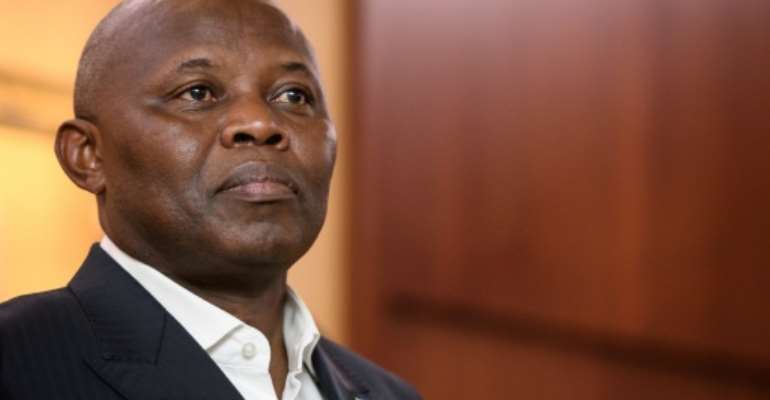 Vital Kamerhe's supporters say he has been the victim of a political trial designed to prevent him from running for president in 2023. By Fabrice COFFRINI (AFP/File)

An appeal hearing for a top presidential aide in the DR Congo has been set for July 24, less than a month after he was sentenced to 20 years' hard labour for corruption, his lawyer said Tuesday.

Vital Kamerhe, 61, a veteran political figure who was President Felix Tshisekedi's chief of staff, was convicted on June 20 of diverting more than $50 million (44 million euros) of public funds.

The case marked the first time a figure considered untouchable in Congolese political life -- Kamerhe was also a key ally of former president Joseph Kabila -- has been tried and convicted for corruption.

"We, the defence, filed the request for the appeal after our client Vital Kamerhe was sentenced. You will find out our strategy in court," Kamerhe's attorney, Jean-Marie Kabengela, told AFP.

Kamerhe's lawyers said last month that they would appeal on the grounds that forced labour is banned under the country's constitution.

His sentence included disqualification from holding public office for 10 years.

His French lawyer Pierre-Olivier Sur had condemned what he called a "mockery of a trial" and a "fast-tracked trial broadcast direct on television".

Sur and Kabengela had said that they would call Kamerhe's situation to the attention of a UN panel probing "arbitrary detention".

The month-long trial, held in the courtyard of the capital Kinshasa's main jail, took place in the context of a campaign for the "renewal" of the justice system to help root out entrenched corruption.

Much of the money Kamerhe was convicted of embezzling was earmarked for building 1,500 social housing units under a programme announced by Tshisekedi after his inauguration in January 2019.

Kamerhe created and heads a political party called the Union for the Congolese Nation (UNC) and ran unsuccessfully for the presidency in 2011.

He was also an early contender in the December 2018 elections but instead reached a deal with Tshisekedi under which he pulled out and campaigned alongside him.

He was then appointed chief of staff when Tshisekedi was named president.

Kamerhe's supporters say he has been the victim of a political trial designed to prevent him from running for president in 2023.

‘Sputnik-V procurement contract must be re-examined’ – Kwaku...
48 minutes ago

Getting Sputnik-V vaccines from black market using middlemen...
48 minutes ago