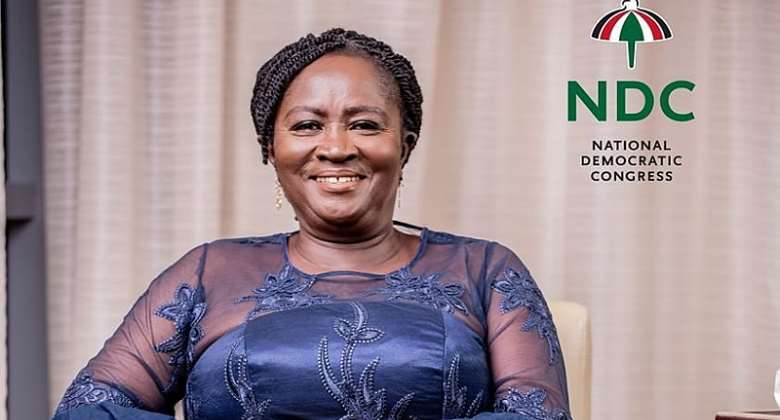 The Vice-presidential candidate of the leading opposition National Democratic Congress (NDC), Professor Jane Naana Opoku Agyemang, since her announcement, has been receiving a baptism of fire or personal attacks (depending on where you stand).

I must say, there’s absolutely no excuse for the bile, abuse and threats against other people. I understand why people are doing what they are doing. You can disagree with a person’s politics without resorting to what goes unchallenged in this echo chamber from ‘activists’ and anonymous accounts.

However, the NDC cannot find everything people say about the Professor offensive and tag critics as enemies against women progress. This is politics that she has signed up for when there are so many decent things she could have chosen, or better still she could have remained a lecturer at the university. Politics is mean and it shouldn't be that way but accepting to play it means that you are fully prepared for Twitter Academicians and Professors.

Playing on gender card by saying “she is a woman” so she deserves special treatment, something His Exc Amissah Arthur of blessed memory never enjoyed, should never be one of the justified NDC’s argument they should mount as defense for the professor. It actually devalues any hard attributes the NDC want the public to observe about Prof. It makes her weak and someone who cannot stand pressure and insults. She should have never garnerd any media attention then!

People will twist everything about her to suit their context. So for NDC to label everything said about her, although said politically, as an insult against women or the misogynist tag, and therefore demanding an apology, is a self-destructive strategy that will make everyone forsake and disengage her to take a lonely path of comfortably lead that will ultimately result in disappointments. Our politics, unfortunately, is beyond gutter, unlike, evangelism, in politics, you cannot stop people ostracizing those they disagree with, therefore we must tolerate political insults by communicating the truth to the lies. Politics is all about engagement. If I stop associating with my opponent, neither of us engage the other and we don't influence the electorates.

It is such an insult from both sides of the aisle when they thought “oh she’s a woman-that will take women voters away from us or she is a woman so she will bring in women votes to us”. It paints the picture of the “low knowledge” of women voter who only votes on identity politics. We all support the notion that women should be free and freed. And never was there a case made more against that notion than in this last few days where we have a woman contesting, and some people want to bully all women to support a fellow woman as if she is the only one who understands being a woman.

People will say the professor is incompetent, she cannot be a Vice President etc. This is not the same as an insult to women capability in general, no one has told Prof. Rita Akosua Dickson, Vice- Chancellor of the Great KNUST as incompetent. No one has disrespected Prof Akosua Dickson or doubted her abilities. The reason is that she is not contesting for a Vice -President of Ghana. Any mean words to Prof Jane is politics as usual. Politics will make a whole grownup and elitist reduced to a street boy pelting stones to purportedly political enemies of his master. Our politics is still so rudimentary. These remarks further divide us, the division which had been our bane.

Politics can sometimes be an enemy to decency, a supposedly fully fledged professor, Jane Naana Opoku Agyemang, has been reduced to a bait for her party to survive!, so to speak. Her kind of politics (forthcoming) will then inspire young girls to take education seriously. But if her party people would make it sound “because she is a woman” then it is over with them!

If NDC makes her untouchable and keep saying “she is a woman slogan”, the people will decide on that then. The fact that a “terrible” person like Trump defeated Hilary Clinton speaks volumes of how politics isn’t a feminist.

Prof Jane Naana must be allowed to engage and not covered. Isn’t that what politics is all about? Engagement. Winning people over. Persuasion. Discussion. Debate.

Her competences will be publicly assessed, and she should stage a defense to safeguard her integrity, but because “I am a woman” should not be one of them. It is all about having unconfrontational but Positive engagement.

Finally, the truth remain superior and this is the truth, those in power have manipulated you into venting your rage on personalities instead of pushing for meaningful change.