Another One Touch Victory For Mahama, With Prof. Naana Jane As Running Mate 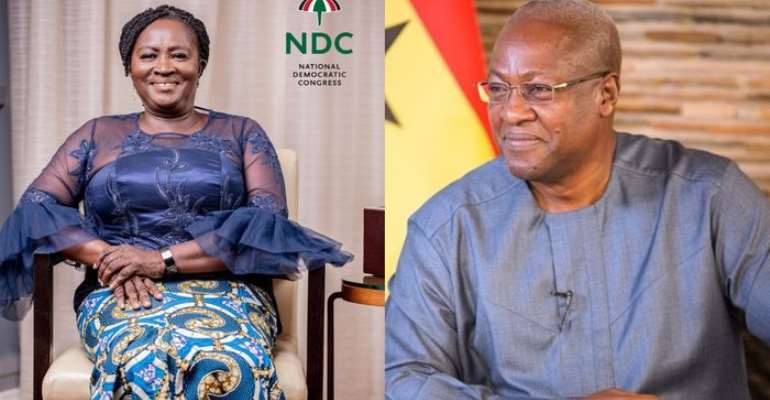 Fellow Ghanaians, Victor Hugo may have had Professor Naana Jane Opoku Agyemang in mind when he said that, "nothing can stop an idea whose time has come." Indeed, "he who is destined for power and authority, does not have to fight for them."

Prof. Naana Jane Agyemang’s partnership with the former President is a union that can best be described as a merger politically solemnized by God almighty Himself in heaven. Victory undoubtedly awaits the two.

So far her appointment has been good news and hope to the NDC as an alternative government but remains a very bad news to the ruling party.

And even as a large collection of intelligent and hardworking stalwarts of the NDC, at an intellectual engagement, unanimously endorsed the consummated and celebrated Professor, Naana Jane Opoku Agyemang, there have been attempts by the NPP to impeach the credibility of the professor.

Political gladiators and green-eyed monsters of the governing party have begun excavating into the life, public and private, of Professor Jane but they are not finding any skeleton in her cupboard.

Consequently, the NPP has resorted to unsavory, unwarranted, and very misogynistic comments as a way of ventilating their frustration and panic that have reached a frightening crescendo!

For instance, the Communication Director of the NPP, Hon. Buabeng Assamoah, has been reported to have questioned the seriousness of former President John Mahama for appointing a woman as a running mate. For him, the former President does not take the Ghanaian electorates seriously for settling upon a woman as a potential president, suggesting that a woman is not qualified to lead Ghana!

Ghanaian women must rise to this challenge in the 21st century politics and leadership.

Again, the Majority leader, Kyei Mensah Bonsu is also said to have made such chauvinistic remarks to the effect that, stepping in the shoe of the president in his absence is a huge task Prof. Naana Jane Agyemand is not fit to do.

X-raying their verdicts on the accomplished professor depicts one reality they seem to be drumming home as a point: “a woman cannot be a president in Ghana” despite her experience and qualifications! Ghanaians definitely least expected that from the NPP.

Nonetheless, being a "woman of substance" as a former Vice Chancellor, former Education minister, UNESCO Board Member, and the Chancellor of a University in Nairobi, Kenya, the Professor is eminently qualified for the vice presidency of the Republic.

At her appointment as the running mate and by God's grace, an incoming first female Vice President of Ghana, even the blind could feel the sincerity of purpose and the revivalist impulses of hope. And without a scintilla of hyperbole, she surely would tower above her counterpart, Dr. Bawumia who has over the years exchanged his technocracy for propaganda.

Fellow Ghanaians, ideally, this year's political experimentation and exhibition of the efficacy and maturation of our democracy, beckon not only a political battle of wits fighter as a running mate, but it calls for a serious spiritual neutralizer. Professor Nana Jane Opoku Agyemang being a woman, the "womb", is more than qualified (spiritually) to democratically partner the former President, come December 7th, 2020, to recapture political power for the NDC and Ghanaians at large.

At this juncture, it behooves me to allay the worries and fears of Ghanaians, particularly, some ill-informed members of the Umbrella Family, the National Democratic Congress NDC party.

Please, with your indulgence permit me to use a philosophical, "political", and perhaps, spiritual approaches to proof why Professor Naana Jane Opoku Agyemang is the most suitable running mate for the epic political tussle of supremacy ahead for the NDC.

For those of us who like "Malamic" interpretation of issues, here you go: why this great Academic giant, Prof. Naana Jane is the best choice to help bring back the political trophy and rescue Ghanaians from a savaging and ravaging foe (NPP).

There’s only a syllogism in this year's election. And it is that, if we are not in normal times due to corona virus that has left hell loose on the surface of the earth never before in the history of the planet in recent centuries, it means that 2020 is a year of abnormalities!

You see, it is President Akufo Addo who always reminds us that we are not in normal times, and for which reason abnormal or unusual things must be observed. How factually accurate the outgoing President Akufo Addo has been with that insightful statement! And let me explain.

Now, just like the alien pandemic, historically, Ghana never has a female vice president. Also, no President has ever left political power and who seeks to democratically recapture it within a term of office. Both phenomena are happening today unambiguously resonating with the current situation of abnormality of the reality of Covid-19.

i. Ghana is beset with an unprecedented plague that never happened before at least in recent history.

ii. Ghana has an ex-President who unprecedentedly wants to recapture power and is being partnered with a first female running mate (in the major political parties) which never happened before.

If we are not in normal times, it means that the abnormal candidate with an abnormal running mate, would carry the day! Which means, President Mahama, by the leave of Allah, is the winner of this year's general elections!

Now, politically, Prof. Jane Agyemang is certainly taller as a Professor and former Vice Chancellor and Minister of State, than a PhD holder in “Propaganda of Economics” who doubles as a former DEPUTY Governor and now Vice President.

If you analyze, both running mates or to a larger extent, camps of the presidential candidates (former President John Mahama and President Akufo Addo) have few things in common, but the "presidential camp" of former John Dramani Mahama, stands tallest.

Both running mates have been "Vices". Prof Naana Jane as a former Vice Chancellor of University of Cape Coast, and Dr. Bawumia as the current Vice President. Whilst Dr. Bawumia reduces his vice presidency to be a propaganda machinery, Prof. Jane used her vice chancellorship to manage the minds of young Ghanaians, including the Zongo Minister, Dr. Mustapha Abdul Hamid.

Hence, president Mahama's camp, even though in opposition, is more promising to be the winner in the forthcoming elections, philosophically, spiritually, and politically.

They seek to exhume and dissect history of the noble madam, and even as they desperately not finding any skeleton in Prof. Jane's cupboard, they have begun to rehash the very decision of cancellation of allowances of nursing and teacher trainees.

For these political vampires and "attack dogs" of the governing New Patriotic Party, it is the former ebullient Educationist Education Minister who presided over the cancellation of the allowances which partly contributed to the lost of the NDC in 2016 election.

So, according to this myopic view, she is therefore not qualified for the job of a running mate as a result and incoming vice president. What a bundle of ignorance!?

Please, I beg to differ, fellow Ghanaians. The cancellation of the allowances, was never the decision of a single minister nor the president, it was the decision of the IMF who prescribed an economic policy known as Contractionary fiscal policy which operation advocated contracting, muzzling, and squeezing the economy of cash. And to do that, anything that could lead to financial abundance in the economy had to be curtailed!

As a result, employment had to be halted and so allowances must be retrieved and not paid! Generally, with that policy government had to tone down expenditure in order to save. And it was the policy of the IMF prescribed for Ghana government under President John Mahama in its economic wisdom, which the government accepted for several reasons.

One reason was actually to clamp down reckless borrowing which has become a pastime under President Akufo Addo in order to pay allowances. President Mahama simply didn’t see it wise to burden the next generation with gigantic debts because of our illegitimate comfort as “forefathers”.

Also, in the educational sector, it was a simple logic to increase the number of nursing and teacher trainees in the training colleges by withdrawing the allowance. So that, many trainees could enroll, and could get posting and jobs after graduation.

The meagre amount of allowances being paid to them by government made the government to undertake preemptive measures to cut down the number of entrants so as to reduce government expenditure on the nurses and teacher trainees.

As a technocrat and golden in the academia, Prof. Naana Jane Opoku Agyemang saw the need to have many Ghanaians educated as nurses and teachers rather than the other way round merely due to meager allowances! That was one reason she allowed that in her sector, after all government was undertaking reforms due to the IMF directive.

President Mahama's choice is the soundest, and all doubting Thomases must shelve their disbeliefs about the enigmatic Professor. She is a symbol of hope for all aspiring female young leaders in this country. She is a cementer and solidifier of our democracy

That's why all women in Ghana, especially, female students in this country, must rise to support one of their own to actualize her vice presidential bid.

Prof Naana Jane Opoku Agyemang is a symbol of women empowerment and hope.